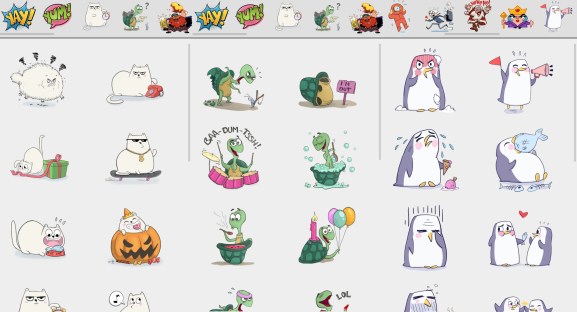 As the year winds down, tech pundits, analysts, and assorted eggheads are taking the opportunity to pontificate about what really mattered this past year and what technologies will change our lives next year

Artificial intelligence. Driverless cars. Smart whatevers. Elon Musk. Robots. Uber. Singularity. Blah, blah. And on and on and on.

But across the board, these digital gasbags missed the one product that easily had the greatest impact on the lives of regular people like you and me:

The elite tech punditry look down their noses at stickers as something for the rabble. Bread and circuses for the masses. But they’re wrong.

Stickers represent perhaps one of the greatest evolutionary moments in the history of human communication. They are tearing down the great Tower of Babel that divides us as a species and making it far easier to communicate with people from around the globe.

Stickers are fulfilling the great promise of Esperanto and constructing a language we can all embrace without having to learn Klingon, Dothraki, or some other made-up language that’s even more embarrassing when spoken outside a convention center packed with comic book nerds.

One can not underestimate the impact the sticker revolution will have. By creating a common tongue, a communal mode of expression, people around the world will realize that we are more alike than different. We will set aside ancient grudges as politicians use stickers to build economic and cultural bridges. War will become a thing of the past. Famine will disappear. Equality will spread across the globe.

Sure, stickers have been popular in some parts of Asia for a few years. But 2014 was the year stickers were embraced around the globe. When their potential to bring about the digital utopia we have longed dreamed about began to take shape.

In that spirit, here are the five biggest moments in stickers over the past year:

Japanese messaging app LINE made $65 million in sticker sales back in 2013. The company took a bold step toward the future in April when it announced that anyone could design and sell stickers in its marketplace. The launch of the LINE Creators Marketplace changed everything. Everything.

Paris-based Feeligo is developing a stickers-as-a-service platform (yes, really) that may bring the sticker revolution to every website in the world. The company was innovating at a breakneck pace this year. Stickers for Gmail. Poo stickers.

But the one we loved the most was animated stickers, debuting in June. No more lifeless cartoons that just sit and stare. Now, stickers can move.

“Animated stickers allow us to show even more specific poses that can not be shown in a still image and give our stickers an even more unique character by showing the way they move and behave,” the company said.

Stickers were once relegated to Facebook’s messaging app, but the social networking giant announced in October that people could now use stickers in comments. This massive breakthrough in commenting promised to ensure that civilized dialogue would become the norm online as people increasingly turned to stickers of hams dressed as bunnies to express their feelings about pictures of cats.

In early December, Google debuted the result of its latest moonshot: New sticker packs for Google Hangouts for Android. While the company had added some relatively lackluster stickers earlier in the year, the latest announcement demonstrate how the search giant had gone all in on stickers.

“Stickers are not new, but we really went to town on this,” said Google exec Bradley Horowitz at LeWeb 2014 in Paris. “We’ve got pirates, we’ve got cats, we’ve got Vikings, we’ve got aliens. A guy taking a bath in a cup of coffee.”

“This stuff is not revolutionary,” Horowitz said. (Wait, what?)

“But when you think about non-verbal communication, a sticker like this says more than anything else I could say,” he added.

The social media giant unleashes a monster innovation: Stickers. On. Photos. On your phone.

“A lightweight new Creative Labs app by the Messenger team called Stickered for Messenger that enables you to add stickers to a photo and send them to friends on Messenger,” the company explained.

The app is available for Android, and soon, for iOS.

This will change everything. Again.