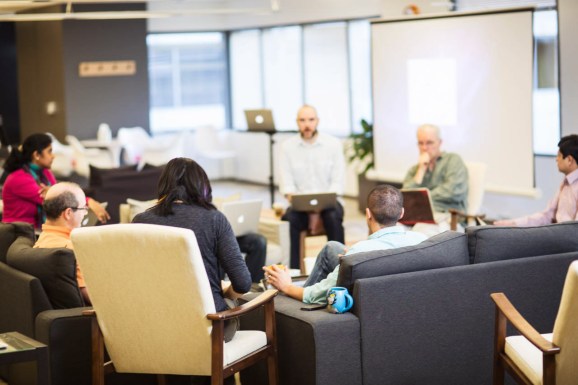 A group of Castlight Health employees in the company's San Francisco office.

Until modern technology completely eliminates human labor, companies will have to manage employees and their happiness and effectiveness.

TinyPulse, a Seattle-based startup, has been helping companies like Stitchfix, Deloitte, and HubSpot keep their employees engaged and get real feedback and insights from them, and it’s announcing today that it has raised $3.5 million in new funding.

Employee surveys are at the core of TinyPulse’s software. The surveys collect employee feedback (even anonymously), which enables the software to deliver peer encouragement, provide data-based suggestions, and track trends and patterns. TinyPulse charges a monthly fee for its software based on the number of team members but provides a 14-day free trial so that customers can give it a shot before committing.

CEO and founder David Niu previously cofounded BuddyTV and Net Conversions, and while taking a break from his career a couple of years ago, he realized, through talking to founders, that employee retention was consistently their biggest fear, as he said in an interview with StrictlyVC earlier this month. Rethinking employee surveys emerged as a clear approach to Niu, and TinyPulse was born.

TinyPulse competes with other companies such as 15Five and BlackbookHR, among others, although they all take slightly different approaches.

Niu has been bootstrapping the startup up until now, so the new funding will enable it to handle more customers. Baseline Ventures led the round, with Harrison Metal and other investors also participating.

TinyPulse was founded in 2012.