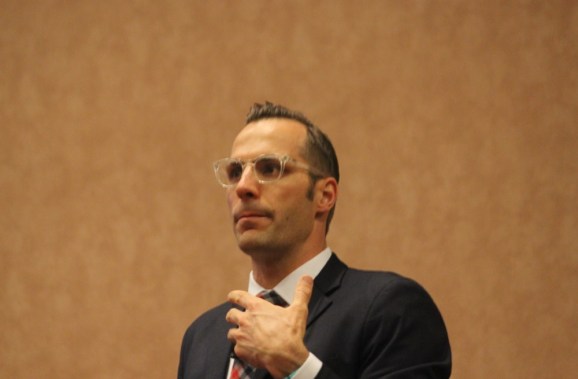 Four big trends are driving consumer electronics today, and they all involve how everyday objects
are becoming smarter and more connected.

Those trends include the digitization of our physical space, permeation of logic, the “Internet of me,” and fragmented innovation. I’ll explain each of these trends below. The top analyst of the Consumer Electronics Association, which puts on the 2015 International CES, predicts these trends will dominate the big tech trade show in Las Vegas this week.

“We are shifting from what something we could do technologically to what is technologically meaningful,” said Shawn Dubravac, chief economist at the Consumer Electronics Association in a press briefing at the start of CES. “We see these things playing out at CES, like micro-customization.”

We can, for instance, use a smart heating system to heat just one room in the house, he said.

“You can even micro-control the vents within each room,” he said.

3D printing is one of the areas benefiting from micro-customization trend. The show now has 50 3D printing vendors, and the sales in the space are rising rapidly, Dubravac said.

Revenues for drones are up 50 percent from last year, and units sold will hit 425,000 in 2015. Global revenue for drone sales in 2015 is expected to be $130 million. He said we could expect to see 100 different types of drones debut at CES this year.

Smartwatches are expected to ship 10.8 million units in 2015, Dubravac said. The space dedicated to smartwatches is up four-fold from a year ago.

“It’s an area that continues to see growth and experimentation,” he said.

The trend for the permeation of logic is about one thing that logically flows from another.

One consequence is predictive customization, or redefining the recommendation as companies such as Netflix have done. The online entertainment service can recommend which movies you will enjoy based on your past viewing. Over time, that predictive engine improves, and it provides data that helps Netflix run its overall business.

Devices like the Dropcam security camera know how many people are in a room. Your smartwatch knows your stress level. Netflix makes recommendations based on basic demographic data. But if Netflix knows you are stressed out, it might recommend a light comedy for you.

Twitter can make recommendations to you about what people of your gender like. But it doesn’t have to ask what your gender is because the data it collects helps it make that determination.

Dubravac said the Internet of Things, or making everyday objects smart and connected, will give way to the “Internet of me.” We’ll see 50 billion objects become connected in the next couple of decades. If you toothbrush is connected, then your dentist will want to see that data. Then he or she can make recommendations based on the data, like why you don’t brush your teeth as much during the weekdays.

Virtual reality, which Dubravac said is going to be a big theme at CES, will further drive the wearable and “Internet of me” trend by giving you something to do in your own world, just about anywhere.

“Where we are going now, what you will see at CES, is a fragmentation of that idea, where a product gets maybe 20 percent penetration,” Dubravac said.