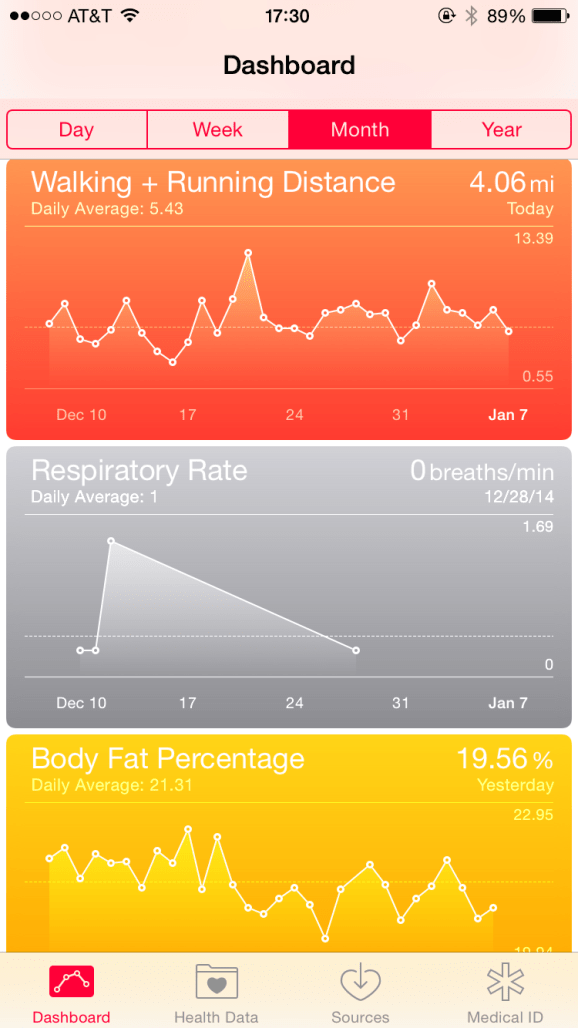 The world’s leading consumer tech company, Apple, has the power to crush competitors and shape trends. Even though smartwatches were a big hit at the massive Consumer Electronics Show this week, the spectre of the upcoming Apple Watch was palpable.

Though we know very little about Apple’s latest device, possibly the single most important feature of Watch is already in our pockets: HealthKit. I’ve used it. It’s delightful.

HealthKit is a personal health database that allows users, their doctors, or their wellness coach to track their vital statistics over time. It’s actually part of iOS 8, not necessarily the Apple Watch, but the HealthKit market won’t really launch until the Apple Watch launches later this year, and the Watch is key. But the significant thing is that HealthKit interacts with other wearables, not just Apple’s.

Up until HealthKit, the most popular health tracking watches, such as the Basis band or Fitbit Flex, simply displayed the data it collected, such as steps taken, calories burned, or hours slept per day.

Health trackers were little island monopolies, where companies vied to be the only source of data. Then Apple quietly slipped in a Trojan horse into the new iPhone 6, which carried a version of HealthKit that automatically tracks data.

In the above screenshot, my iPhone 6 automatically paired with a few health trackers I regularly wear: the Misfit Shine and the Spire. Misfit is a popular Fitbit alternative that tracks exercise, steps, calories burned, and sleep. Spire, a newcomer to the market, is a Stanford-designed waist clip that measures stress through breathing patterns (frequent, shallow breaths are a very strong indicator of stress).

Finally, I manually synced up my Withings body fat scale (the yellow graph at the bottom).

These are just the apps/devices I regularly use to track my fitness, but dozens of applications, from running apps to a sleep tracker, have jumped on as early HealthKit adopters.

CES 2015 was all about the Internet of Things turning everyday objects into digital trackers. Right now, my watch, scale, and belt clip monitor my health. But there will also be smart toothbrushes, bedsheets, cups, forks, and shirts that measure a whole variety of metrics.

For now, HealthKit data is just sitting idle, waiting to be analyzed. Eventually, companies such as Microsoft and Focus Motion are set to mine this data for patterns, so that, for instance, I can know if better sleep helps me lose body fat.

Most importantly, there’s a vast landscape of devices that can make an early investment in the Apple Watch economy, which is essentially just a clearinghouse for the Internet of things. For any device manufacturer that’s not building a smartwatch, Apple’s economy is already rolling out the welcome mat.