Update March 10: We’ve corrected our coverage of Hearnotes which, among other issues, citied incorrect city headquarters. We apologize for the error.

While trends like the smart home and wearables dominated the consumer electronics landscape at the 2015 International CES, we found another trend in electronics surfacing: a return of quality home audio gadgets. We cleaned the wax out of our ears and tested several such gadgets in search of audio products worthy of your attention. We even snuck up to the top of the Venetian, where we found that even among the elite, there are products within the grasp of the aspirational audiophile. Listed below is the cream of the crop.

The most interesting whole-home solution we found was (quite boringly) named Multiroom System. It’s a Bluetooth speaker setup that can connect an iOS or Android device to up to five separate speakers around a home.

Where Bluetooth is normally limited in range to 10 meters or around 30 feet, Multiroom System makes use of a technology it’s calling “Supertooth” in order to take the connection that your phone has with one speaker and extend it to the other four. 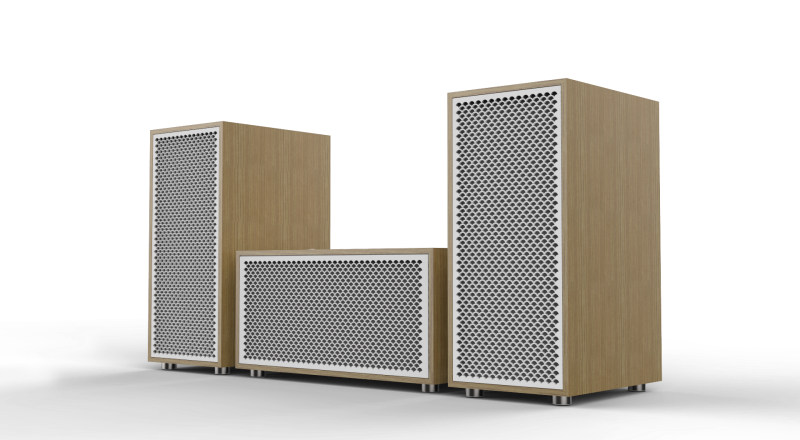 In our limited time with the product on the noisy CES showroom floor, the Multiroom System sounded pretty good. It grabbed the attention of many passersby with its volume, and its ability to pump bass was more powerful than expected.

We didn’t have a chance to try out the Multiroom System’s Supertooth technology, but the app was pretty robust for a first-run product. It allowed users to quickly turn speakers on and off and change volumes of each connected speaker individually.

The one aspect of Multiroom System that surprised us the most was its price. Consumers will be able to scoop a bundle of three speakers for about $300. For five speakers, the cost comes to $480, which means there are some savings for buying in bulk. When you compare the price of three Multiroom System speakers to Sonos’ Play:1 ($200), it’s clear that for a person interested in listening to audio throughout their apartment, this so-called Supertooth system may just be worth a try. No price was given for individual speakers, nor was there mention about buying a set of two to expand to the maximum, five, later.

AfterMaster, a new product by AfterMaster HD Audio Labs, was developed by Larry Ryckman, an entertainment entrepreneur and producer with decades of experience in mastering audio tracks. AfterMaster is essentially a cloud services company that allows users (aka independent artists) to upload their tracks for his team to remaster them.

The AfterMaster technology passes audio through its algorithms to add depth and vitality to otherwise flat recordings. What do we mean by flat? Ask any audiophile to explain the pain they endure when listening to streaming music services.

We experienced AfterMaster’s processing power working on film and live-recorded concert audio. The sound of the action movie, which was streaming on Netflix, was noticeably enhanced, with the spoken audio easier to understand amid the explosions and gunshots. The live concert recording, which resided on Amazon’s instant video service, was likewise impressive, with the sounds of the audience present but not imposing on the music being played by the artist. 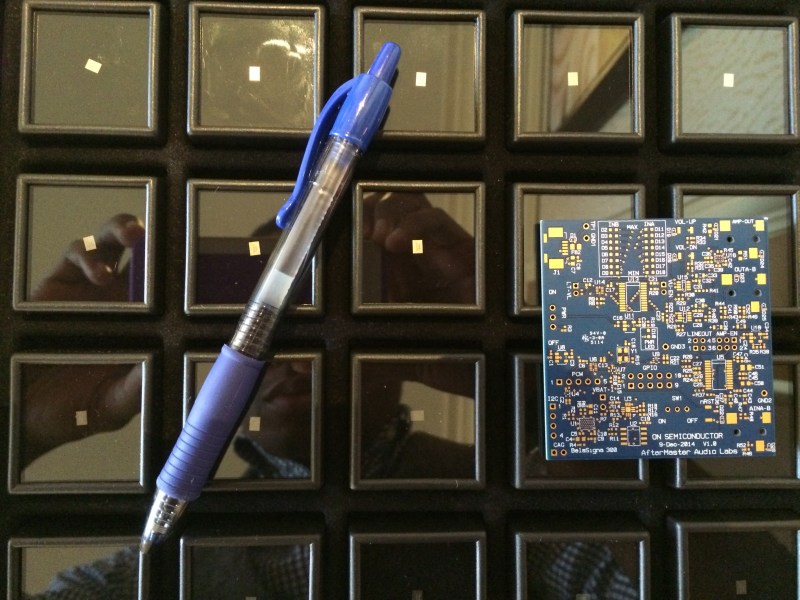 Above: Pen and PCB board provide scale for a case full of AfterMaster’s tiny DSP chips.

Ryckman says that the plan is to use an “Intel Inside-like” play, which would mean embedding the tiny microprocessor that AfterMaster has hardwired with its algorithm into everything from earphones to speakers. The digital signal processing (DSP) algorithm can also be rendered in software, though details on that process are less clear.

There are loads of wireless headphones out there, and some are even engineered for sports. But they’ve all got some sort of limitation. HearNotes is focused on changing that. San Francisco based HearNotes thinks that there’s a better way than Bluetooth to deliver wireless streaming audio from your device to your ear.

Unlike standard Bluetooth audio transmission, the HearNotes transmitter can send data to the right and left ears independently and simultaneously, which means no wires connecting the ear pieces, which is one less thing to snag as you work out. Each ear bud also has its own battery supply, which lasts for about four hours. 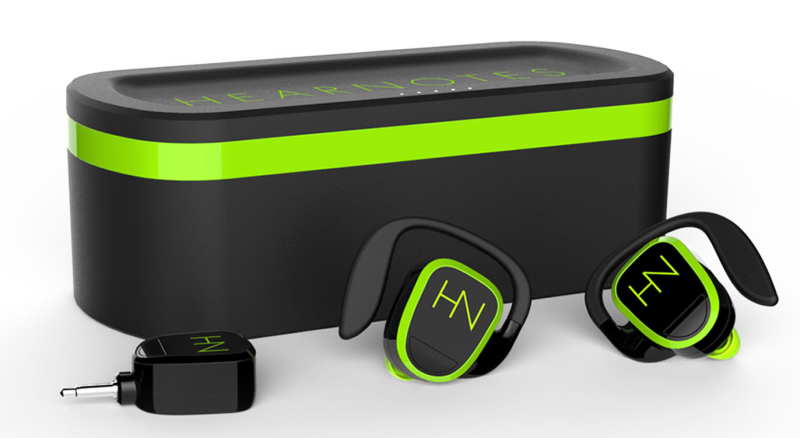 Above: The HearNotes case is also an inductive charger for the KLEER audio headphones and their dongle.

Editor’s note: An earlier version of this article held that HearNotes’s device contained activity tracking sensors. That information was incorrect and has been removed.

Creative has long been an actor in the PC speaker space, but their new Soundblaster Roar takes aim at Jambox, Bose, and anyone else attempting a Bluetooth speaker small enough to pack in a bag but large enough to fill a room.

We were able to spend some time with the SoundBlaster Roar and were impressed. For just under $150, the consumer gets a speaker with NFC pairing, stereo Bluetooth connectivity, and dedicated conference calling features, including the ability to record. The SoundBlaster Roar also comes with USB PC connectivity (that is, it can become a USB speaker for your computer) and a microSDXC card with dedicated controls that allow users to play music they put on the card. 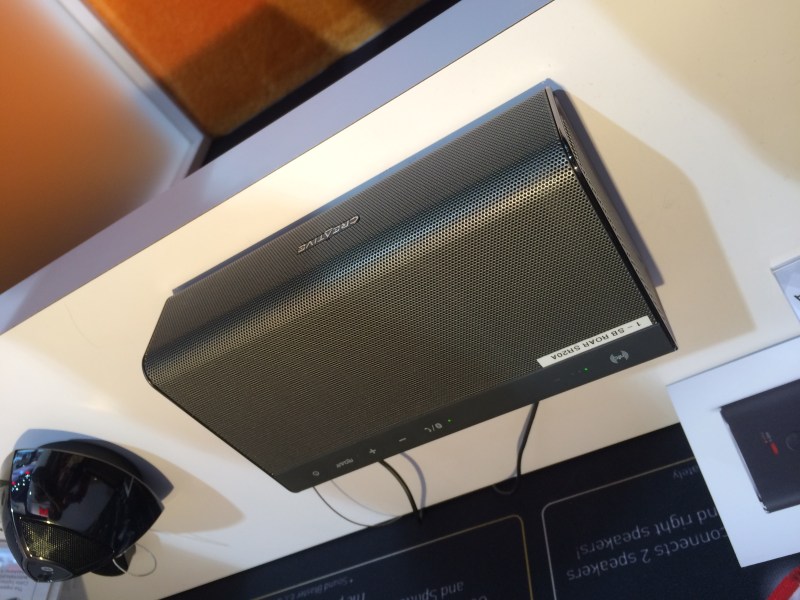 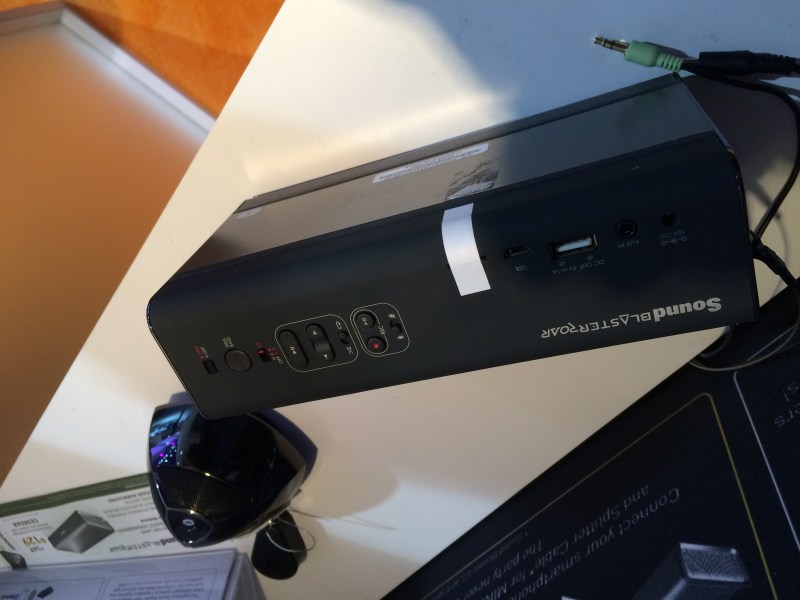 Above: The SoundBlaster Roar offers a lot of functionality for $150.

The SoundBlaster Roar also comes with two interesting Roar Buttons. The one on the top amplifies the overall sound of the speakers by a few decibels when the party’s live. The other button focuses on pumping the bass. The device should be available by Q3 2015.

Audiophile on the cheap: Meridian

UK-based Meridian is known for fancy speakers. Some of their systems retail for as much as $80,000. At CES, among the high-end audio exhibits, they did a few strange things. First they offered up a new high-resolution audio file format (MQA), then they announced a partnership with a streaming audio company (TIDAL) to deliver this high-fidelity content, and finally the unthinkable: they offered a sub-$300 device. 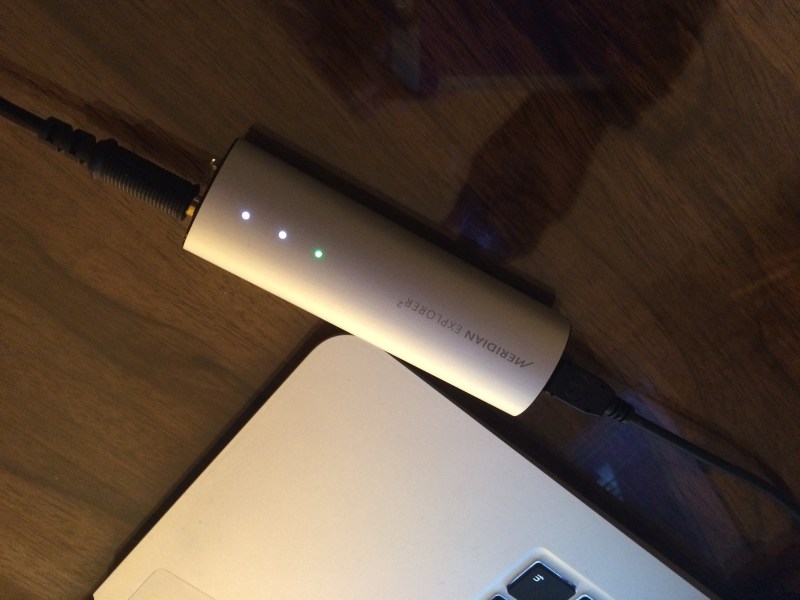 Above: The $299 Meridian Explorer lets mere mortals have a taste of high-resolution audio. The green light indicates MQA playback.

The $299 Meridian Explorer is a USB dongle that allows audiophiles on the go to take their fancy audio files (see what we did there) wherever they want. When it’s time to listen, users attach their dongle to the USB port and then plug their headphones into the dongle. Using the accompanying software, Meridian is able to deliver its MQA (Master Quality Authenticated) audio files to the user. In addition to delivering higher bitrate sound via the high-bandwidth USB ports of today’s computers, the dongle is able to authenticate the audio files that support MQA technology — that is, audio files that have been certified to be lossless copies of the original master tracks of each recording. That means users are hearing the artist as the studio producer heard the artist during the recording of the track.

It’s difficult to describe audio, but suffice it to say that the sound is impressive. While the Explorer device is no doubt focused on luring well-to-do millennials into the glamorous world of high-resolution audio, the fact that Meridian has linked up with TIDAL, the high-end music streaming service, means that with that fancy new dongle, users will have easy access to content worth listening to.