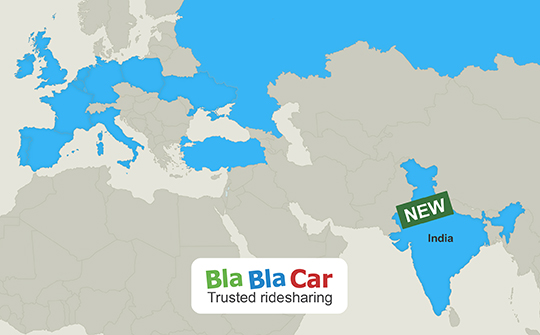 Paris-based BlaBlaCar said today it had launched its ridesharing service in India, the start of an ambitious plan to roll out its service around the world.

India is the 14th country where BlaBlaCar operates its city-to-city ridesharing service. Unlike Uber, which focuses on rides within a city or region, BlaBlaCar targets people driving longer distances between cities that don’t have convenient public transportation options.

The move into India has been in the works since BlaBlaCar raised $100 million last summer. With 1.2 billion people and poor transportation infrastructure, India is an obvious first target for BlaBlaCar.

In addition, the company’s executives have said that car ownership in India is on the rise, and having the option to share rides is a way to help some people pay for cars they might not otherwise be able to afford on their own.

Meanwhile, the company is also in the process of getting ready to launch in Brazil, a country with similar demographics and transportation issues. For the moment, the company has said it has no plans to enter the U.S. market.

The India expansion comes after a couple of years of furious growth in Europe. BlaBlaCar says it now has 2 million riders every month.