Apple is building its spaceship campus. Google is expanding like a weed into new offices around Mountain View. And Facebook hired famed architect Frank Gehry.

These giants are building the offices of the future, and trying to give Silicon Valley a much needed architectural kick in the pants. But it looks like Samsung will beat them to the punch.

Samsung America’s ambitious new campus is on track to be finished in July, according NBBJ, the architectural firm that designed it. That would mean it’s open at least one year earlier than these other campuses.

The new U.S. headquarters for the company’s semiconductor operations is located in north San Jose and will have 680,000 square feet. Eventually, it will be home to 600 employees working in R&D and sales. That size, of course, is notably smaller than Apple’s new campus that will have 14,000 employees.

Still, the new Samsung building will be one of the more distinctive landmarks in a region sorely lacking in them.

The design includes a 10-story tower, unusually tall for the region. The tower is a series of two-story buildings stacked on top of each other. In between each set of two working floors is a floor that is actually open green space, with no walls. Basically, every third floor is a park.

The center of the main tower is wrapped around a courtyard and is connected to adjacent buildings by see-through walkways. The other shorter buildings have sides that will be covered with greenery and roofs covered with solar panels. The idea, according to NBBJ, was to keep employees as connected to the natural world outside as possible.

The state was super excited about this, and showered the company with incentives to stay in San Jose and build it. In general, the new HQ is just a piece of Samsung’s aggressive expansion in Silicon Valley.

Here’s a virtual tour of the building, and a gallery of photos provided by NBBJ of the construction: 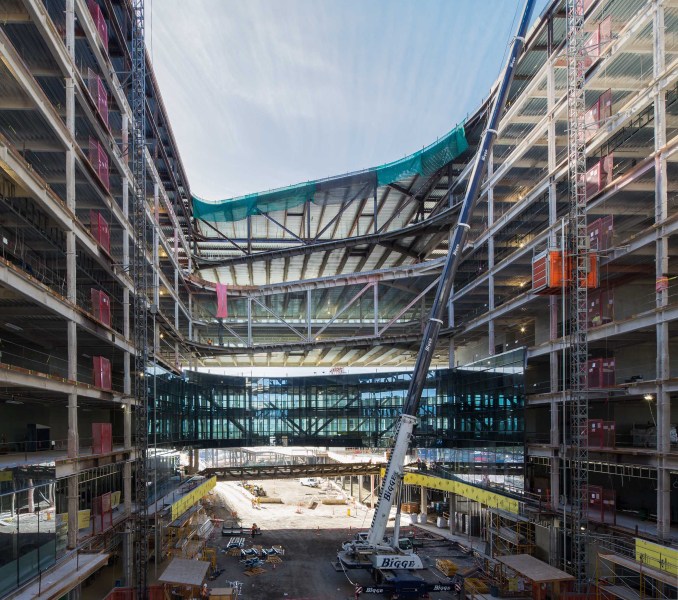 Above: Samsung's new Silicon Valley headquarters is under construction in North San Jose.