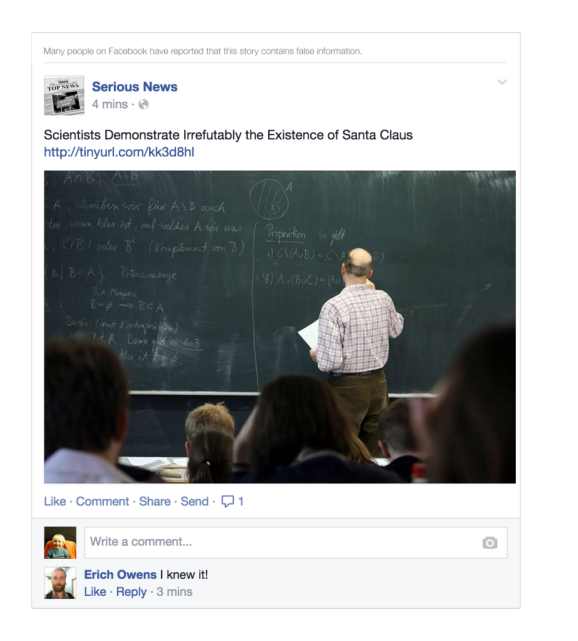 Facebook said today that it has tweaked its News Feed algorithm so users will see fewer hoaxes.

In a post this morning, Facebook wrote that the News Feed update “reduces the distribution of posts that people have reported as hoaxes and adds an annotation to posts that have received many of these types of reports to warn others on Facebook.”

The company said that its users were complaining of seeing too many hoaxes or misleading stories — posts that it characterizes as “News Feed spam.” One problem with them, Facebook said, is that many users share the hoaxes without realizing they’re fake, only to delete them later.

“These types of posts also tend to receive lots of comments from friends letting people know this is a hoax,” Facebook wrote, “and comments containing links to hoax-busting websites.”

Facebook said that in order to reduce the number of hoax posts, the News Feed algorithms will now take into consideration when large numbers of people flag a post as false, as well as when significant numbers of users delete posts.

This is an interesting, user-focused move by Facebook. On the one hand, it will reduce the number of ad impressions users see in the short term. But on the other, the company clearly saw it had a problem on its hand and decided to think about making users happy over the long term.