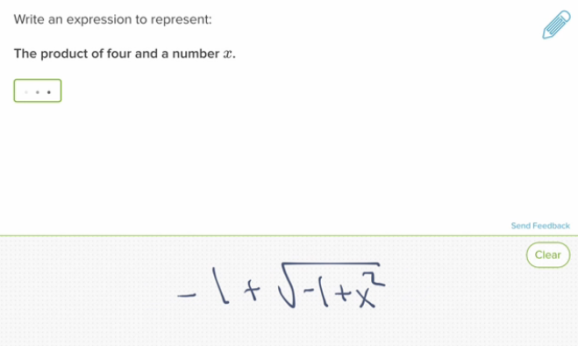 It is ironic that math is the one subject that doesn’t work well with computers. If you walk into most university math departments or into the data science team corner at a tech company, you won’t see iPads. Math is still written on paper and walls in 2015. Equations and graphs are not something that computers can recognize easily.

Today, Khan Academy made a small but impressive step in taking math into the 21st century, with the release of an upgraded mobile app. The new version adds more personalized lesson plans, including 150,000 lessons that are aligned to the national Common Core educational standards.

But what I’m excited about is the handwriting software for math equations. The video below showcases automatic identification of long equations (and even the ability to manipulate and erase them on the fly), which was designed in partnership with handwriting recognition startup, MyScript.

Of course, it is possible to put math equations into a computer. Academic papers are submitted in electronic form, though mostly for publishing; there’s an entire computer language dedicated to the laborious process of digital equations (LateX) — and it’s a real pain in the neck to learn. To be sure, if you want to think on the fly with math, most people are still putting pen to paper.

As of now, the equations are mostly for early high school. But it’s easy to see how they extend to all sorts of advanced math in the near future.