In a quest to answer critics who claim Uber is driving down wages among drivers, the company released an ambitious study today of its U.S. drivers. The study argues that the company’s explosive growth is being fueled by competitive pay and flexible work schedules that are attracting hoards of new drivers.

The publication of the study today includes a blog post from Jonathan Hall, a Harvard-trained economist who is Uber’s head of policy research; the survey of 600 drivers, conducted by the Benenson Strategy Group; and an academic paper coauthored by Hall and Princeton economist Alan Krueger.

That 27-page research paper mixes data from the Benenson survey and information Hall and Krueger were allowed to gather by running anonymous queries using Uber’s own administrative data. Krueger was also granted “full discretion over the content of the report.”

Before digging into the findings, here is the upshot from Hall and Krueger:

“The spectacular growth of the number of active driver-partners using Uber over the last few years is evidence that Uber provides a large number of workers a choice they prefer to other available options or not working at all.”

And make no mistake: The growth is staggering. Just look at this chart from the study: 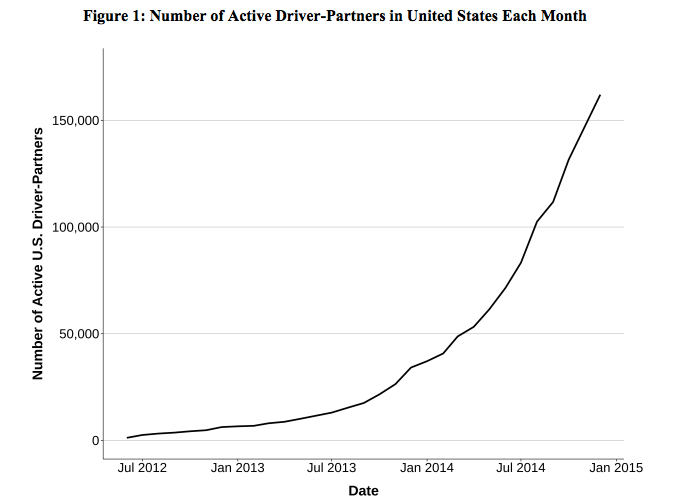 According to the study, Uber had more than 160,000 drivers active on its service at the end of 2014. But even more incredible was that Uber added 32,000 drivers in November and 40,000 in December. During the last three months of 2014, those drivers received $656.8 million in payments from Uber.

No wonder Uber had no trouble raising more than $3 billion in venture capital in 2014 plus another $1.6 billion in convertible debt from Goldman Sachs this week despite a rash of bad publicity about its executives’ behavior, its security, and its use of customers’ data. While much of that money is fueling Uber’s aggressive global expansion, the company is still growing rapidly on its home turf.

In the BSG survey (which seems to me to have had a somewhat low response rate at 11 percent), “flexibility” was the number one reason drivers cited for why they chose to join Uber. And more than half of these drivers had previously worked in some kind of transportation industry.

But in looking at Uber’s own data, Krueger and Hall concluded that the “flexibility” reason is valid. In particular, they said most drivers’ schedule and number of hours vary widely week to week, and the majority of drivers (62 percent, according to the BSG survey) have some other kind of employment and are working for Uber to supplement their income. In particular, they found it striking that Uber’s growth is accelerating even as the economy improves, indicating drivers are choosing to come to Uber, rather than turning to it in desperation.

“This exponential growth clearly indicates that the advent of Uber has provided new opportunities in the economy that a large and growing segment of the workforce finds attractive,” the study says.

In the survey, 78 percent of driver-partners said they are very satisfied or somewhat satisfied with Uber. (Though again, given the low response rate, one might argue that the most unhappy are unlikely to respond to a request to take a survey.) Also, only 14 percent of drivers are women. That’s more than the taxi industry, but obviously low against the general working population.

The question of pay, however, remains complex. By the numbers, Krueger and Hall found that Uber’s pay is better than that of the taxi industry. 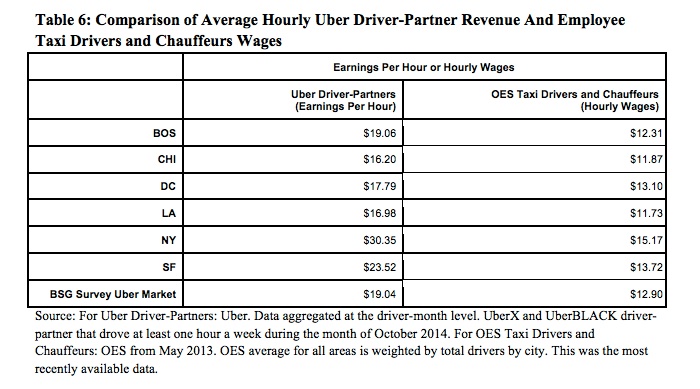 But that big gap in favor of Uber can be a bit misleading because Uber drivers are not reimbursed for driving expenses such as gas and insurance, while taxi drivers may be. On the other hand, Uber drivers may be able to deduct some of those costs from their income taxes.

“Nonetheless, the figures suggest that unless their after-tax costs average more than $6 per hour, the net hourly earnings of Uber’s driver-partners exceed the hourly wage of employed taxi drivers and chauffeurs, on average,” Krueger said.

We’ll see if an Uber-funded study can change any minds about the company and its practices. But as the authors note, its fantastic rate of growth means that Uber is a significant symbol of this new era of work and warrants further study and scrutiny.