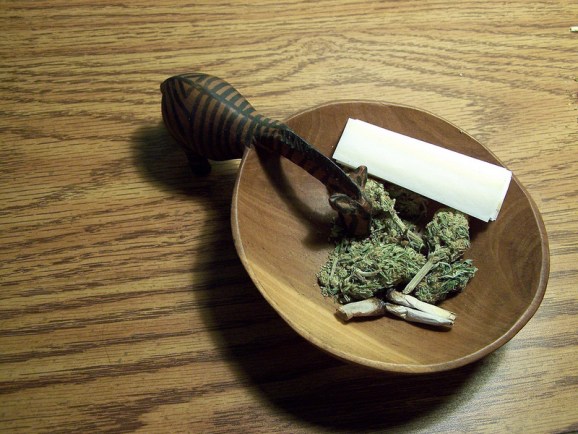 But of course, weed-loving entrepreneurs have been around since before that, and they’ve spawned plenty of startups.

With regulations slowly moving in the direction of legalization, we’re likely to see more and more companies popping up. Colorado and Washington led the way, with more states voting to legalize the substance within their borders, and Congress’s spending bill for 2015 prohibiting the government from interfering with state legalization.

Although there is still a long way to go, here are some important cannabis tech startups to get you familiarized with this up-and-coming industry:

Leafly, an online community for medical marijuana consumers, earns a spot in our roundup not only because it’s now pretty much part of Founders Fund’s investment portfolio, but also because it serves as Privateer Holdings’ market research tool. Privateer acquired Leafly, whose community members use it to get information on cannabis strains, doctors, and dispensaries, in 2011, and it’s since become its finger on the pulse of the market.

“We think about Leafly as a source of data, a source of information,” Privateer Holdings chief executive Brendan Kennedy told VentureBeat in an interview. “We know what strains they’re searching for — they provide that information,” he added.

Like Leafly, WeedMaps is an online community for cannabis users that provides them information on strains, doctors, dispensaries. It also lets them connect with each other — a “Yelp for cannabis.” But more than that, the nearly seven-year-old company is part of a small empire. In 2010, the U.S. subsidiary of a mostly unknown public company, LC Luxuries Limited, acquired it, and at the time it was making $400,000 in revenue per month. Since then, WeedMaps has acquired three other companies, including Marijuana.com (also on this list), a sort of social network/bulletin board with an obvious theme.

Last summer, the company also displayed its charitable side, partnering with Uber and a Denver-based dispensary to delivery cannabis and raise money for multiple sclerosis research.

By partnering with local dispensaries, Eaze and Meadow deliver you medical marijuana so you don’t have to get off your couch and disturb your flow. Eaze launched in August in San Francisco, and plans to expand to Los Angeles, Denver, and Seattle soon. Meadow is also based in San Francisco and offers essentially the same service. These two are also luckier than some of their peers — last month, the city of Los Angeles shut down Nestdrop, and Seattle’s regulations have been making it tricky for delivery services to operate.

In a world in which we’re now getting anything and everything delivered to our doors, there’s no doubt that cannabis delivery services will continue to sprout up despite regulatory conditions.

In 2011, WeedMaps (and its parent company) acquired Marijuana.com for $4.2 million, likely paying this large sum because of its choice domain name. Marijuana.com is sort of a Pinterest for cannabis, providing a mix of cool images from users, as well as posts about strains, dispensaries, and other informational items. The site’s users create a Marijuana.com account (they were previously able to use their WeedMaps accounts), and do typical social media things like browse and post content, follow other users (even celebrities like rappers Wiz Khalifa and Snoop Dogg), and so on.

If anything, Marijuana.com is proof of the nearly mainstream culture and lifestyle that already exist around cannabis. Entire communities of enthusiasts come together on the Internet to share and consume content around the substance, accessories, and lifestyle.

Maker of the Pax vaporizer, Ploom is all about beautiful smoking accessories — the “Apple of smoking,” as I’ve heard it described. James Monsees and Adam Bowen founded the company following a conversation about smoking just outside a studio at Stanford University’s design program 11 years ago. And while Ploom officially targets tobacco smokers and even sells its own blends, its vaporizers are well appreciated among cannabis users.

With its smokeless design, the Pax vaporizer is made of medical-grade materials, has a smart battery system for optimal performance, and heats up in 30 seconds, among other features. The company recently released its second model, the modelTwo, a slimmer take on its classic vaporizer.

PotBotics, a Palo Alto, California- and New York City-based company, is developing fancy tools to help patients, doctors, and growers better understand cannabis and its interaction with people. Its upcoming PotBot recommendation engine in the form of tablet software, will help patients figure out which strains they should use, using algorithms and reviews. Its BrainBot electroencephalography helmet will enable doctors to measure a patient’s brain waves and reactions to a particular strain, and avoid blindly prescribing their best guess. NanoPot, the company’s third and upcoming product, is an “advanced DNA reader that scans cannabis seeds to optimize growers’ yields,” as the company’s website describes it.

The company has raised $1.3 million so far to help the industry gain scientific and medical legitimacy.