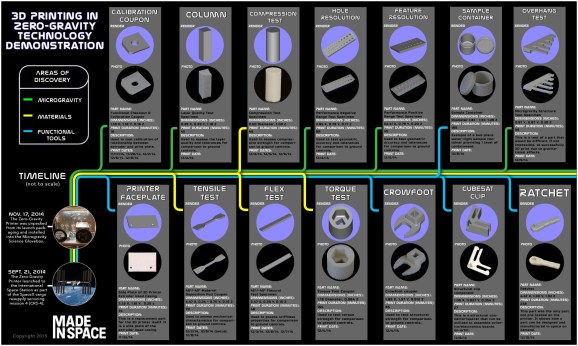 Image Credit: Made in Space

Made in Space, the Silicon Valley startup that made the 3D printer that’s been installed on the International Space Station, said that after four months, the printer has finished its first round of objects.

In a blog post this morning, the company said that the printer has now finished making the first 14 objects, ranging from a calibration coupon to a ratchet. The ratchet represented the first time in history an object had been emailed into space.

“Although there were only 14 unique objects printed,” Made in Space wrote, “25 parts were printed in total. Duplicates were printed in order to determine the consistency of the printer over time.”

The 14 total jobs go right to the heart of what Made in Space’s technology — and 3D printing technology in general — is all about: letting people or institutions make just what they need, rather than carrying unnecessary inventory or having to wait around for order parts to arrive, a particularly slow process for those aboard the ISS. Instead, astronauts on the ISS, or sailors on, say, Navy ships, need only to carry enough materials to print what they need. And although the technology is likely not up to the task of manufacturing large numbers of production-quality items, it is ideal for making prototypes or one-offs of things like non-precision tools.

The work being done by Made in Space and on the International Space Station is a perfect example of the partnership between a purely Silicon Valley startup and the government. Made in Space was one of the first companies to spin out of Singularity University — a private nine-week course held at NASA’s Ames Research Center in Mountain View, Calif. that covers exponentially growing technologies like nanotechnology, biotechnology, and bioinformatics.