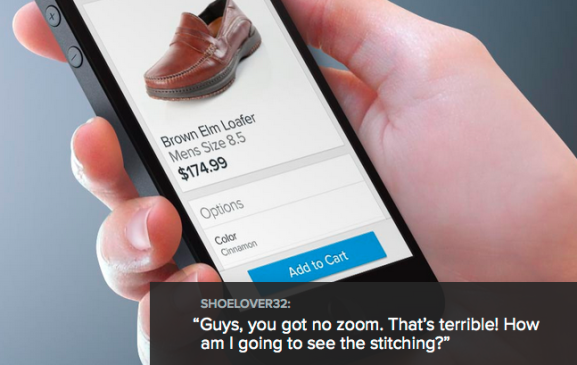 Boasting the largest user experience platform on the planet, UserTesting said today it has scored a whopping $45.5 million so it can better decipher why users do the things they do.

The Mountain View, Calif.-based company, which says it has more than 30,000 client companies, pays real people to record their screens and voices as they try to complete tasks on sites, apps, prototypes, and sometimes physical products.

“[Ticket service] StubHub turned to UserTesting to find out why customers weren’t completing their purchases,” CEO Darrell Benatar told VentureBeat. His company is all about finding out why customers are doing something, as compared to analytics firms’ emphasis on the what.

The answer, shown in the videos, was straightforward. “Users were confused about how to make a purchase,” he said.

No wonder. The link to the purchase page was called “See Details.” In response to the testing, StubHub simply turned that misleading link into a bright orange button that said, “Go.”

The result, Benatar said, was “a 2.6% conversion rate increase and millions of dollars in extra revenue.”

Why would StubHub need an outside testing firm to discover that a buy link shouldn’t be labeled “See Details”?

“Even though it might be obvious to outsiders,” director of marketing Phil Sharp told us, “it’s generally not obvious to companies.”

They’re “so wrapped up in the day-to-day, and looking at analytics, that it’s easy to lose sight of these experiences that are frustrating customers and preventing them from buying.”

UserTesting is also announcing today its new smartphone and tablet recording tech to facilitate the testing of mobile software.

The new funding — which brings the total raised to $53.5 million — will be used to expand the test participant panels so they reach “niche demographics and international users,” Benatar said. It will also be invested into creating new ways to measure a product’s user experience over time and against competitors, and for better testing what he described as “the complete omnichannel customer journey across different devices and locations.”

Benatar said his company differs from other user testing companies — including TryMyUI, Userlytics, and Youeye — in that UserTesting clients “currently have access to more than one million users, [providing] a much more robust panel of test participants than the competition.”

Additionally, he said, UserTesting offers a test turnaround for most assignments of about an hour, “which is a faster turnaround time than any competitor offers.”

This Series C round was led by Accel Partners, with participation from OpenView Venture Partners.