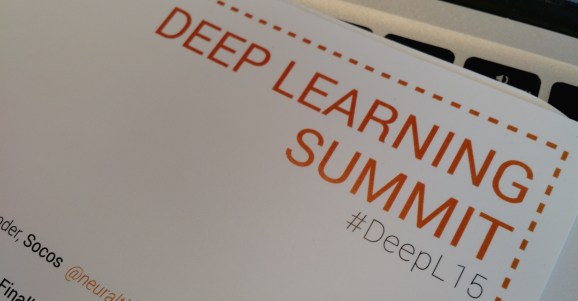 At the Deep Learning Summit in San Francisco on Jan. 30.

Clarifai, one startup with a service for recognizing things in images, today introduced a pretty nifty new capability. Now the startup can quickly point out the things that appear in videos.

Startups in this field and even major companies like Baidu and Google have been trying to show the advantages of their systems over others. Clarifai’s expansion into video marks an interesting development — one that could have potentially lead to some serious business value.

To perform this work, Clarifai employs a trendy type of artificial intelligence called deep learning. The process entails training systems called artificial neural networks on lots of information derived from audio, images, or other inputs, and then it presents the systems with new information and receiving inferences about it in response.

An advertiser, for instance, could get a good sense of when to drop an ad into a video with Clarifai’s technology, Matthew Zeiler, the startup’s founder and chief executive, told VentureBeat immediately following his presentation on the news at the Deep Learning Summit in San Francisco today.

And indeed, Clarifai is already working with advertisers in this regard, Zeiler said.

In the demonstration Zeiler gave onstage, he showed different a chart below a video measuring the appearance and disappearance of “themes” being shown in video. Each theme got a line; as one “theme” — take bricks, for instance — became more prominent in the frames, the corresponding line on the chart went higher.

The system was able to understand a video spanning more than three minutes in just 10 seconds, Zeiler said.

Zeiler concluded his talk by saying Clarifai’s application programming interface is now open for anyone to use; it’s no longer invite only.