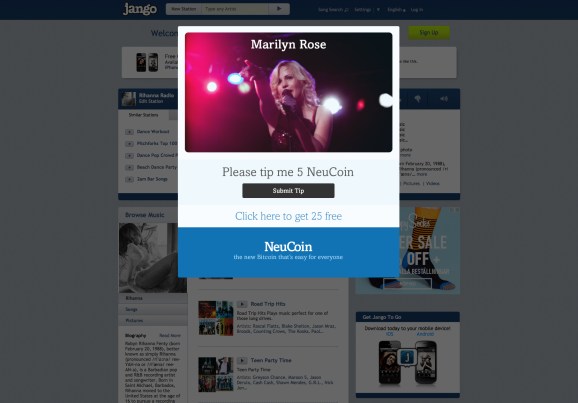 Today, NeuCoin, a new alternative digital currency, is announcing a raise of $2.25 million in investor funding. The fresh cash will help the company build its consumer-aimed cryptocurrency.

The company wants to launch a cryptocurrency that is easy to use and well marketed — something that Bitcoin is not. Though the list of retailers, both on- and offline, that accept Bitcoin is growing, the cryptocurrency still has a usability problem. Getting hold of Bitcoin can be difficult if you don’t know anything about it, and there is no central place where you can have all your questions answered. Plus, using a credit card online is just as easy as, if not easier than, using Bitcoin.

Founders Daniel Kaufman and Johan Sandstrom have a background in consumer marketing. “I’m not a techie person,” said Kaufman. “We’ve started a number of tech companies … but we’ve always had CTOs.”

Their idea with NeuCoin, is to create a cryptocurrency designed to be really easy to obtain, spend, and hold. Like other services, NeuCoin will have a wallet service. Kaufman also says he plans on giving coins away in order to get a following.

Upon launch, NeuCoin will have a presence on media website Mongo and music-streaming service Jango, where users will be able to “tip” musicians and Mondo’s media creators. NeuCoin will offer consumers 25 NeuCoin if the consumer agrees to tip someone.

The concept sounds a lot like ChangeTip, a Bitcoin company that allows people to “tip” others with small amounts of Bitcoin. Kaufman named ChangeTip outright as an inspiration. He also thinks that micropayments (the ability to send fractions of a dollar) are the best use case for digital currency.

Kaufman says he plans to create two foundations, a growth foundation and a utility foundation, which will check the work of miners. Like Bitcoin, NeuCoin is mined, but it doesn’t require proof-of-work. For those who are unfamiliar, proof-of-work is a security measure that makes sure that miners have logged the transactions they said they have. NeuCoin doesn’t use this system; rather the company plans on using a body of democratically elected foundation members who will check the work miners are doing.

Some complain that this makes NeuCoin centralized, operated by one body rather than a community — just like Bitcoin. And that’s true — NeuCoin users will have to trust the foundations to make sure that the system is working.

Within the cryptocurrency field NeuCoin will be up against a slew of competitors like Doge Coin, LiteCoin, and Bitcoin itself. Last year Bitcoin companies raised a total of $314.7 million in funding worldwide. Out of those, the Bitcoin ecosystem is by far the most developed. Bitcoin is also beginning to have more of a presence in mainstream media. So NeuCoin may have difficulty getting people to learn about yet another digital currency — even if it can create a better experience around the coin.

NeuCoin is slated to launch towards the end of March 2015.

*Update: an earlier version of this article stated that Neucoin raised $2.5 million. The correct amount is $2.25 million.