“America’s 50 most generous donors increased their giving by 27.5 percent last year,” it writes, “powered in large part by a $1.5-billion gift from Bill and Melinda Gates and a stunning rise in the number of tech entrepreneurs under 40, three of whom gave more than $500-million each.”

One of the first acts of newly minted rich guy and WhatsApp cofounder Jan Koum, after his company’s acquisition by Facebook, was to donate $555,000 to charity. Former Facebooker and Napster cofounder Sean Parker also topped the list ($550M), along with Google’s Sergey Brin ($382M).

Together, they represent about 47 percent of top philanthropic giving. The Chronicle categorizes former NYC mayor Michael Bloomberg as “entertainment and media.” However, Bloomberg’s information terminal, which is really the profit engine of Bloomberg Media, is often considered a tech invention. If we recategorize Bloomberg as a tech guy, then the tech industry accounts for more than half of the money given by these 50 top givers (given the way Bloomberg funds tech-related causes, this might seem even more appropriate). 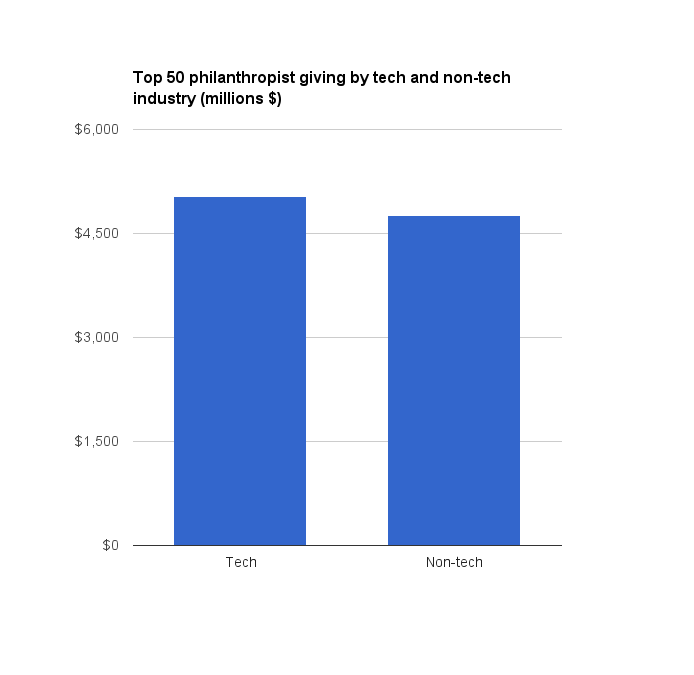 It should be noted that tech giving is not without its controversy. Much of the money is given to donor-advised funds, which earmarks the money for giving but leaves many details unanswered. Salesforce head Marc Benioff has been very critical of this type of giving.