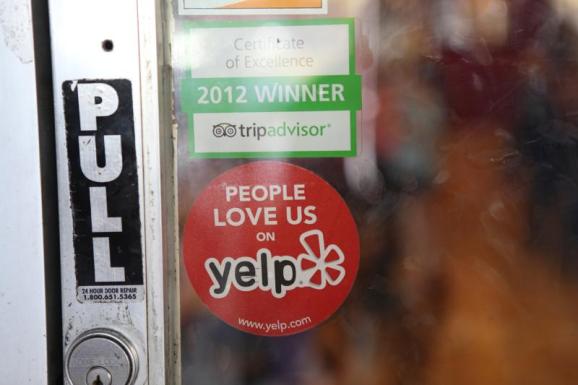 People Love Us On Yelp

Today Yelp announced it’s acquired Eat24, an online food ordering service and long-time Yelp partner. The deal, which has already closed, is valued at $134 million and amounts to $75 million in cash and 1.4 million shares of common stock.

Founded in 2008, Eat24 competes with the GrubHub Seamless food ordering monolith. Eat24’s 2013 deal with Yelp, where it added an ordering widget to various restaurant pages, gave the service a fighting chance against larger competitors. Following this deal, Yelp and Eat24 will only get closer. Yelp chief Jeremy Stoppelman says he plans to further integrate with Eat24 to “enhance our user experience [allowing] our large consumer audience to transact directly with businesses.” In the same statement, Stoppelman called online ordering “a key vertical for Yelp.”

Reached by VentureBeat, a Yelp spokesperson declined to share if it will stop working with competing Yelp partner Delivery.com. Later, a separate spokesperson said, “We expect our online booking and ordering partners to continue as Platform Partners.”

This news means quite a bit for Yelp, which has largely sustained itself on advertising, with mixed results. It’s noteworthy, however, that Yelp is in no way giving up the ad business — in fact, it will apparently increase its sales staff by 40 percent this year.

In other news, Eat24 only yesterday announced a deal with Sidecar — Sidecar will power some of Eat24’s food deliveries in California.

Here’s what Yelp said about the Eat24 deal on its blog:

Eat24 joined the Yelp Platform as a transaction partner in 2013 and since then we’ve been looking at them, well, the way they look at bacon. We couldn’t resist any longer and I’m excited to announce that we have officially brought them into the Yelp family!

For those of you who haven’t used the service, its mission is to keep you from having to cook, shop, or wear pants. Eat24 is an online food ordering app and website that covers about 20,000 restaurants across the country. As a Yelp Platform partner, they’ve been a valuable driver of our growth in the restaurant category while continuing to build an impressive business of their own.

Online and mobile food ordering is still in its infancy and restaurant and food searches are extremely popular on Yelp. We believe that the acquisition of Eat24 will allow us to build a better, more seamless ordering experience for consumers that we can grow through 2015 and beyond.

We are excited to welcome the Eat24 team to Yelp as we work on delivering the best local search and transaction experience available to consumers and great local businesses.