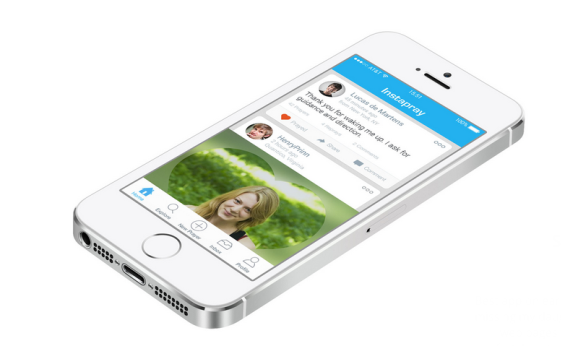 Then there’s this app called Instapray (free, for iOS and Android), which is all about prayer, meditation, comfort, and faith — and a lot of people are using it. The app just passed a major milestone: 30 million prayers have now been posted and/or shared through the app. That’s a whole lot of prayers.

Instapray forms a social community around prayers. Users can write orisons and add tags (including tagging people). They can send private messages to other users. They can comment on other people’s prayers and offer encouragement, or share those with others.

You could do these same things on Facebook, but most people wouldn’t want to pray on Facebook. It’s too public.

Reading this little testimonial from the Instapray website helped me get the drift:

“I was unable to sleep last night, missing my daughter. I was reading scriptures and web pages online trying to find some spiritual comfort. I posted prayers and within minutes I had over a dozen beautiful people praying from different countries. I no longer felt isolated and alone in my grief. What a blessing! So thankful for this app!”

Instapray is not a religious app exactly — it’s a prayer app. It doesn’t mention or even suggest any denomination.

Although Instapray has never announced it (until now), the app maker is backed by investment last year from superinvestor Peter Thiel and Founders Fund.

“I started Instapray to create a safe, supportive online community, a place free of the overwhelming negativity present across much of the Web,” Instapray founder and CEO Fryderyk Ovcaric said. “As online bullying has increased in recent years, with the rise of anonymous sharing apps amplifying this destructive and hateful behavior, I believe the world can benefit from Instapray now more than ever.”

Ovcaric came to the U.S. from Poland to get an MBA from Stanford. That’s where he got the idea for Instaprayer. “Some people thought it was crazy,” Ovcaric said. “But that’s the great thing about Stanford, they said ‘this is completely nuts but go and do it’.”

So using some leftover tuition money, Ovcaric hired a team of engineers back in Poland and started building the prayer platform.

Since the app is free, and since his company had taken a venture capital investment, I asked Ovcaric if there was a business model in play.

To which he replied that money was never part of the reason for launching the app. “It was never envisioned as a monetization platform,” Ovcaric said. He added, however, that monetization may be something his company will have to think about at some point in the future.

And Theil and Founders Fund were totally OK with that when they invested, Ovcaric said. “They never asked me that question,” he said. It’s not every day that someone comes into a venture capital firm and pitches a prayer app, after all.

It’s also not every day you see a business metric on a spreadsheet called  “number of prayers shared.” But Instaprayer has more than 30 million of them, and that kind of engagement can’t be ignored.