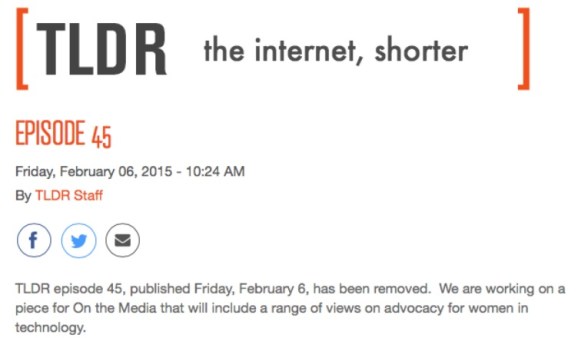 There is a new controversy brewing about whether a man should be allowed to comment on the challenges that women in technology face. A podcast on WNYC’s TLDR blog site raised issue with my being quoted in a cover story in Newsweek about Silicon Valley’s sexism. The podcast, which was removed Wednesday, by WNYC, made many false assertions about my intentions and values. It was extremely hurtful and damaging. I was never asked in advance to respond to the many allegations in it, despite their serious nature.

WNYC Vice President Jim Schachter did call me after the podcast was removed to acknowledge that they had made a mistake by not asking me to comment. I thought we had an understanding that WNYC would allow me to respond in the form of a blog post on their Web site. But a day and a half after I sent a response, they informed me that they would not publish it. I had also asked for the podcast to be reinstated so that people could form their own judgment on its merits, but they have also refused to do this. Note that I had never asked for it to be removed—I believe that everyone is entitled to express their opinions.

The podcast can however be found here and I encourage you to listen to it so you can understand the issues.

1. “Vivek Wadhwa is the guy who gets paid to talk about women in tech.”

I have never accepted any form of payment from any organization for speaking on diversity (including women in tech). I have instead asked companies to donate what they would have paid me to women’s organizations or to buy a few copies of my book Innovating Women. On one occasion, Politico reimbursed me part of my airfare ($500) to Washington D.C. to speak at their Women Rule event and they provided a hotel room.

I have advised several CEOs on diversity. In every case, I asked that they donate to groups such as Women 2.0, Anita Borg Institute, National Center for Women & Information Technology, and Black Girls Code. One of these companies made a six-figure dollar donation to Women 2.0.

The truth on Innovating Women.

I invested about $40,000 of my own money in research that was conducted at Stanford and Duke, over a two-year period, on women in innovation. Kauffman Foundation also provided some of the funding for this research. To bring to life the voices of women all over the world, I decided to crowdcreate a book with the help of women. I launched an Indiegogo campaign to fund this book, Innovating Women. Here is what was committed on Indiegogo on the profits from the book:

In addition to the matching funds by Google for Entrepreneurs and book sales and royalties, all Indiegogo funds raised for the Innovating Women campaign in excess of operational costs will be used to support women to learn about advancing technologies at Singularity University’s Graduate Studies Program and in the Singularity University Labs accelerator. Lynn Tilton’s contribution of $9,000 will also be used for the women’s education and accelerator programs. All together, these funds will be split 50/50 between the two programs.

Here is what is written on the front page of the Innovating Women Web site:

All proceeds from the sale of this book will go to a fund at Singularity University to educate women about advancing technologies & to fund their start-ups.

The contract with Diversion Books (the publisher of Innovating Women) requires 100% of the proceeds to be deposited into Silicon Valley Community Foundation—a recognized 501(c)(3) nonprofit organization.  I have no access to this money and the funds will only be used as committed.

2. I am trading up the chain. “That is basically what it looks like he did,” they say on the podcast. “He got to VentureBeat and TechCrunch and then he got named Time Tech 40 the most influential minds in tech 2013, like you can’t make that [expletive] up. From there he’s gone to write for the Wall Street Journal about us. He’s written two different articles about women in tech at least.”

Venturebeat and TechCrunch weren’t my start. And I received significant recognition and had a writing platform long before I co-authored Innovating Women.

I became a BusinessWeek columnist in 2004, wrote my first Wall Street Journal oped in 2008, began writing regularly for TechCrunch in 2009, and Washington Post and VentureBeat in 2011. My Washington Post articles are syndicated to hundreds of newspapers worldwide on the Bloomberg-Washington Post News Service. Huffington Post also started syndicating my articles last year. I have also written for Inc., PBS Newshour, MIT Technology Review, Harvard Business Review, Foreign Policy, Times of India, ASEE Prism Magazine, MSNBC and many other publications.

In Feb. 2012, the U.S. government awarded me distinguished recognition as an “Outstanding American by Choice”— for my “commitment to this country and to the common civic values that unite us as Americans.” I was named by Foreign Policy Magazine as a Top 100 Global Thinker in 2012. The Economist named my book, Immigrant Exodus, a book of the year in 2012. In 2000, Forbes had named me as a “leader of tomorrow”.

I held positions at Harvard Law School, Duke University, UC-Berkeley, Emory University, and Stanford Law School. I was a VP of technology at Credit Suisse First Boston and founded two software companies. We took my first company public in 2005 when it had yearly revenues of $120M. My companies raised more than $100 million in capital from private and public sources.

I have been featured in thousands of articles in top publications worldwide since 1990 and have been on shows such as 60 Minutes, NBC Nightly News, Good Morning America, and CBS Morning News. I have testified to the Senate and House on several occasions and have spoken in front of several world leaders.

3. “He has written two articles about women in tech, at least”

I have actually authored more than 75 articles on this subject since 2006—when I first became aware of these issues. Some can be found here.

4. The podcast says that I believe that women understate their accomplishments.

This is not an opinion, but a conclusion drawn from research. In two major research projects I have undertaken, I surveyed and interviewed more than 1,000 women from all over the world. What I learned was that first-time women entrepreneurs need encouragement, support, and mentoring.

Here are two widely cited papers published by Kauffman Foundation that are based on my research and may help to explain my conclusions:

Are Successful Women Entrepreneurs Different From Men?  and

Note that the second paper acknowledges that it is based on my research, but does not list me as an author. I wanted all of the credit to go to the women who helped me analyze the data and to Kauffman Foundation.

5. The podcast claims that, “He is taking up space and sucking all the air out of the room” by speaking on the subject of women in tech.

Much of this controversy started because I was featured in the Newsweek cover story about sexism in tech. Some women believe I, a man, should not have been quoted in this because a woman would have been quoted had I not been. I don’t believe this to be the case and I did refer the author Nina Burleigh, to other women, including Heidi Roizen, who was featured in the story.

I regularly refer journalists who contact me to women in tech. I have chosen not to be quoted or mentioned in the vast majority of articles that I helped journalist with. I explain to them the background of the issue, send them copies of Innovating Women, and tell them who to speak to.

I have never claimed to speak for women but only about my research into the issues of gender discrimination in the technology industry.

Only on one occasion have I had a conversation such as this with a woman on Twitter DM—which is the equivalent of email. This was with Kelly Ellis—who was mentioned in the TLDR podcast. Kelly first sent me 12 Tweets which raised issue with my name being on the cover of Innovating Women, questioning where the funds from the book were going, and criticizing me for comments I had made. I responded to several of these in the public forum. Then Ellis followed me on Twitter. Rather than continue to engage in a public spat, I asked her via DM to come and speak to me in person at Stanford Law School, where like other professors, I hold regular office hours for students.

My message to her was “Kelly, please visit me when you are at Stanford next. I really feel bad about all this and would love to learn more.”  I sincerely believed that a discussion would be more productive than bantering in 140 characters.

7. The podcast mischaracterizes a line from a VentureBeat column of mine, “Let the boys have their social media while women save the world.” This is supposedly discouraging to women.

The VentureBeat article was the summary of a TEDx Bay Area talk that I had given, on why the future belongs to women. The article explained:

Women are primed to lead in this new era. Girls now match boys in mathematical achievement. In the U.S., 140 women enroll in higher education for every 100 men. Women earn more than 50 percent of all bachelor’s and master’s degrees, and nearly 50 percent of all doctorates. Women’s participation in business and MBA programs has grown more than five-fold since the 1970s, and the increase in the number of engineering degrees granted to women has grown almost tenfold…

8. The podcast claims that Innovating Women’s Web site does not list the names of the women who contributed to it.

Wrong. There is a long list of contributors here and here.

9. I’m accused of taking credit for the work of U.S. CTO Megan Smith and Google’s Mary Grove in a Huffington Post column.

My columns almost always originate at The Washington Post, which was the case with this piece.  The Huffington Post then publishes these 24 hours later. I do not control how these are posted. The byline and headline are not in my hands. The column appeared on The Washington Post with Smith and Grove’s bylines. The Huffington Post piece did list my name, but had a clear acknowledgment at the beginning of the article that this was an excerpt from Innovating Women and was written by Smith and Grove.

I became involved with the battle for diversity because I really believed in the cause. It is my intention to keep fighting this battle and to keep speaking about my research and what I believe to be right. This is a fundamental issue of equality and a necessity for our economic competitiveness.