Ever since the first smartwatch designs started hitting the market a few years ago, we’ve become completely comfortable with a single paradigm: The smartwatch is an accessory for your smartphone. It may possess a few features that your phone doesn’t have, but basically, it’s an add-on. A nice to have.

But what if that paradigm is backward?

Today, Canadian inventor Simon Tian unveils the product that he hopes will demonstrate that we’ve been thinking about our smart gadgets all wrong: the Neptune Duo.

VentureBeat attended a briefing for the Duo, was shown a non-working prototype, and heard Tian describe his vision for the product.

As the Duo’s name suggests, it’s a two-part product: the Hub, which you wear like a watch on your wrist, and the Pocket, a phone-like screen you carry in your… er, pocket.

“You’re a slave to your smartphone,” Tian declared matter-of-factly. “We’re reversing the roles.”

Above: The Neptune Hub, seen from the side. The Hub will be offered in small, medium, and large sizes and is not adjustable. Image courtesy of Neptune/Simon Tian.

He’s referring to the fact that we blithely go about our daily lives with our entire digital existence (more or less) housed in a fragile 4.5-inch touchscreen device. “You lose your mind if you lose your phone,” Tian pointed out. He’s right. We even have psychological label for the fear of losing one’s phone: nomophobia. By evolving the concept behind the smartphone into the relatively svelte body of the Hub, Neptune hopes to create “a new bare minimum,” in Tian’s words.

How does the Neptune Duo perform? Wish I could tell you. Unfortunately, both the Hub and the Pocket we were shown were non-functional prototypes. I was able to wear the Hub and hold the Pocket, but beyond how they felt (almost exactly as you would expect, based on the press photos on this page), there’s not much else to say.

This meant that most of the conversation with Tian focused around his vision for wrist-based computing, which, as it turns out, was surprisingly contradictory at times.

And yet the Neptune Hub, which Tian described as “a consciously utilitarian design,” is aimed squarely at early-adopters and possesses a very sci-fi feel. It wouldn’t have looked out of place on the set of TRON: Legacy. If the Hub isn’t “geeky,” I don’t know what is. Actually, I do: It’s called the Neptune Pine. 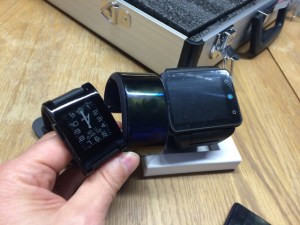 Above: The Neptune Hub (middle) seen next to a Pebble (left) and a Neptune Pine (right). Photo by Simon Cohen.

Back in 2013, Tian launched a project on Kickstarter that raised more than a few eyebrows. His Neptune Pine smartwatch was essentially a full-fledged Android smartphone reduced to the size of a ’90s-era pager and attached to a black plastic watch strap. To my eyes, and many others, it was a clumsy Frankenwatch — ambitious in its attempt to house so much functionality inside a wearable, yet hampered by an industrial design that only its mother could love. At the time, I predicted it would die on the vine. I was wrong.

Tian eventually raised $800,000 — beating his funding goal by 700 percent — and has since delivered all 3,000 units to backers. A further 3,000 to 4,000 units were built, and that inventory is being sold via Amazon and Canadian retailers Future Shop and Best Buy at $369 CDN each. While hardly the runaway success of the Pebble, which sold over 68,000 units during its initial funding period, Tian proved that there was at least some interest in having a wearable that was capable of being more than just a smartphone add-on.

The Duo is an iterative next step on the journey that started with the Pine. Tian is convinced that our essential computing and communication needs will be met with devices that go with us, everywhere. And while the Pine and the Hub are both wrist-based gadgets, Tian isn’t necessarily tied to that formula. “The wrist form factor might not be the best,” he said. “But it has to be on you. As the technology shrinks, we’ll probably shrink [The Hub] like a Misfit, where it’s a small modular thing and you can have customizable bands.”

Whether it’s on your wrist, your belt, or somewhere else entirely, the big question is: Are people ready to accept this new computing paradigm?

Tian thinks we are and points to his experience with the Pine: “They’re using the Pine as their main cellular product,” Tian said, referring to the Pine’s backers. “Most of the time they don’t carry their other devices anymore.” 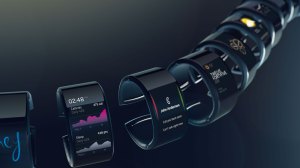 Above: Artist’s rendering of what the Neptune Hub will look like when it displays apps. Courtesy Neptune/Simon Tian.

He’s betting that the Neptune Duo will attract a much bigger audience for the same idea if he can give it to them in a package that is smaller, lighter, and, frankly, sexier. “People don’t want to wear something that’s big,” Tian conceded when asked why the Pine wasn’t a bigger seller.

But what about the smartphone and its universe of apps? “I’m not trying to kill the pocket screen, but for a lot of situations you just don’t need it,” Tian pointed out. “I see apps merging with websites. The experience will be much like a native app, but you’ll access it just like a website.” 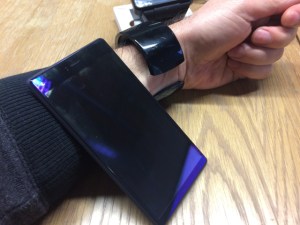 Above: The Neptune Duo: The Pocket “dummy” screen and the wrist-worn Hub. Photo by Simon Cohen.

The Hub is the brains of the operation, running Android Lollipop on a quad-core processor and providing wireless and data connectivity via 3G/4G, Bluetooth, Wi-Fi, GPS, and NFC.

Using a design that integrates the watch and the strap into a single bangle-like object, the Hub is able to distribute its 1,000 mAh battery into six identical modules located throughout its crescent shape. “We’re utilizing the entire circumference,” Tian said. “Flattened out, it’s longer than your smartphone,” Tian pointed out, indicating my iPhone 5s.

The Pocket is a 5-inch touchscreen that looks identical to at least half a dozen existing Android smartphones on the market, if perhaps a bit thinner than some. Neptune’s press release for the Duo refers to the Pocket as an “interactive dummy display,” which I suppose is pretty apt given that its primary function is to offer you a larger window for interacting with your Hub.

Its secondary use is as a back-up battery for the Hub. With a 2,800 mAh battery of its own, you can plug the Hub into the Pocket for a quick pick-me-up if your wrist-based activities exceed what Tian described as “a single day of normal usage.”

Neptune is offering a novel approach to its pricing for the Duo. Instead of the usual incrementally more expensive backer tiers that offer more features or add-ons, the Duo will actually get cheaper to buy the sooner you commit to paying for the product. Willing to pony up the full price right away? The Duo will only cost $498. Hoping for more of a layaway plan? You can pay as little as $49 up front, but then the total will be $700. For these prices, you’ll get the Neptune Duo (Hub + Pocket) plus a wireless stereo earbud “necklace” that doubles as the charging cable for both the Hub and the Pocket. Neptune starts taking pre-orders today.

It’s a safe bet that if the Pine — with its chunky, uber-geeky design — was able to attract a small but significant audience, the Neptune Duo will see even stronger uptake among those who buy into Tian’s vision.

But for now, I suspect the wearable-first paradigm that the Duo embodies will remain a very small niche within the consumer tech space, even if it does represent the most likely version of our collective computing future.

Tian, like so many inventors before him, is just a little ahead of his time. But that’s OK. He’s got plenty of time for the rest of the world to catch up.