File-sharing startup WeTransfer has announced a $25 million funding round from Highland Capital Partners Europe (HCPE) to help grow its business aspirations across the U.S., Europe, and elsewhere. This represents the Dutch company’s first external funding since it was founded in 2009. 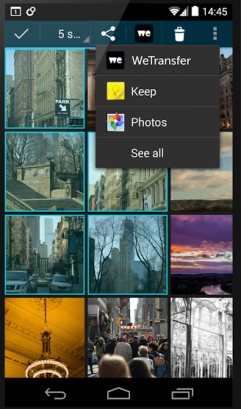 Available on the Web and through native mobile apps, the basic premise behind WeTransfer is that it lets you send large files easily, with the founders setting out to build something “their parents could use.” It’s completely free for transferring files of up to 2GB, which remain downloadable via a dedicated link for 7 days, and no account is required. For $120 a year, WeTransfer Plus lets you send 10GB files to multiple recipients; it starts to resemble the likes of Dropbox or Google Drive, as it offers 50GB of cloud-based storage too.

Though it now has $25 million in the bag, we’re told that this isn’t something the startup actively courted.

“Funding isn’t something we proactively looked for, but having been approached by a significant number of investors from across the globe in the past two years, we realised there were bigger opportunities to grow as a service and a brand,” explains Bas Beerens, founder and CEO of WeTransfer. “When HCPE approached us, we had an instant connection.”

Indeed, as well as the cash, HCPE will be offering WeTransfer “advice and expertise” in its quest to expand internationally, with Tony Zappalà and Irena Goldenberg, partners at HCPE, joining the WeTransfer board.

Today’s news comes hot on the heels of French startup Infinit launching its peer-to-peer (P2P) file-transfer service for Windows, having already been available for Mac. The fledgling startup says it’s planning to “compete aggressively” with WeTransfer, letting its users send unlimited file-sizes through its P2P platform.

WeTransfer says it has been profitable since 2013, and claims it has grown its user base to 25 million active users per month. The Amsterdam-based company also says it has “more than doubled” its revenues in the past year, though it wouldn’t reveal any hard numbers.