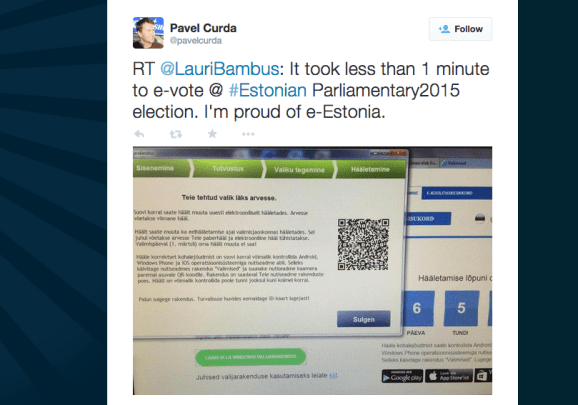 In Estonia, it takes voters less than a few minutes to vote for president on their mobile phones. The technology for super-quick electronic voting exists, but its available in only a few countries around in the world.

Estonia’s Prime Minister explained in a YouTube video how easy it is to vote:

Estonia held a round of voting this week, and happy citizens were tweeting how proud they were of the country’s technologically forward-thinking government.

“Gave just my vote in two minutes, being hundreds of miles away from home. How awesome is this. #election #Estonia” tweeted one citizen.

The reason why America hasn’t adopted online voting remains complicated. The simplest explanation is that American elections would be a much (much) bigger target for hackers, so the security protocols have to be more stringent.

Also, Estonia has been willing to use a national identity system, which helps citizens do more things online, from banking to voting. National IDs are politically contentious in the U.S., with critics and civil libertarians worried about the potential privacy implications and the potentially bloated bureaucracy necessary to maintain it.

Aside from a national ID, some experts don’t think the net is safe enough for America to try it out. “My position is that internet voting will be trustworthy at some point, but we don’t know how to do it now,” Stanford University professor David Dill told The Verge.

Despite the critics, Estonia is forging ahead with what is arguably the most advanced democracy on earth. President Toomas Ilves has overseen a digital strategy that allows citizens to easily set up businesses, manage their health care, and deal with their children’s schoolwork.

No one would expect that tiny little nation would be so advanced. But, like many things on the Internet, innovation comes from the least likely places.