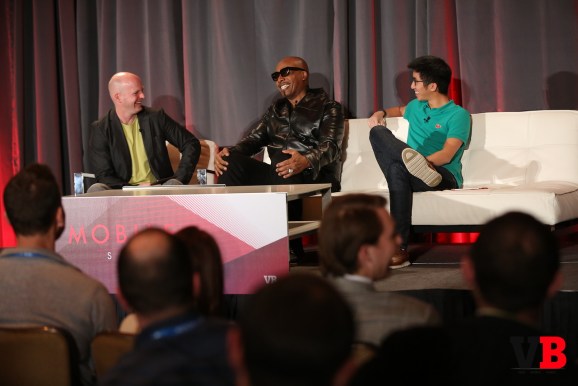 MC Hammer has been moving in technology circles for a long time. He remembers talking to Apple and SGI about how to put video on the Internet back in 1994.

Today Hammer is still very much involved with technology. These days he’s very interested in the mobile and social spaces.

He’s currently an investor in 10 or more tech startups. One of the promising startups that Hammer has invested in is a mobile rewards company called Kiip. Kiip works with brands and developers to deliver highly relevant rewards to mobile users.

Kiip chief executive Brian Wong (who is now 23 years old) joined the Hammer onstage at VentureBeat’s Mobile Summit. The two are good friends, and unlikely ones. Wong is a nerdy-looking Asian kid, and Hammer showed up at the conference in a leather jacket and black shades. The two met five years ago at an event thrown by prominent angel investor Ron Conway.

Both as an investor and as a performer, MC Hammer has a very good reason to find ways to reach today’s young people in compelling ways through digital channels.

“Our generation is spoiled,” Wong said. We order an Uber, and when it doesn’t show up in five minutes, we say ‘Fuck it’ and order a Lyft.” (Big laugh from the audience here.)

Wong said marketing to the young is all about timing. He said that for young mobile consumers, there’s a key moment when their immediate wants and needs align with the channels and messages of mobile marketers.

“It’s capturing the moment where people give a shit,” Wong said — a moment in which a lot of money can be spent. “So there’s more competition to own that moment,” he said.

And, as Mr. Hammer pointed out, the rewards and other content delivered in that moment have to be relevant to the context in which they’re delivered.

“It’s all relative, right? So if you’re running, it’ll be something that has to do with running,” Hammer said. It might be a coupon for a cool low-calorie drink, but it’s not likely to be a coupon for a cheeseburger from McDonald’s or a dog-grooming session.

Wong jumped in with another example. “We did an experiment last year where we gave people rewards in the car,” he said. “So when its time to get gas, we’d reward you with a tank of gas from Shell.”

Kiip built an app for Jawbone that rewards people for achieving fitness goals.

“We put ourselves in this serendipitous place between the brand and the user, but when we saw that we could sort of let the brand take it and own it,” Wong said. Wong points out that the partnership will allow MasterCard to reward its members for behaviors other than just charging things to the card.

Wong said he’s gained a lot from his 5-year-old relationship with Mr. Hammer.

The feeling is mutual. Mr. Hammer: “My mentor-led company taught me to invest in the person, and I won’t let him go,” he said of Wong.