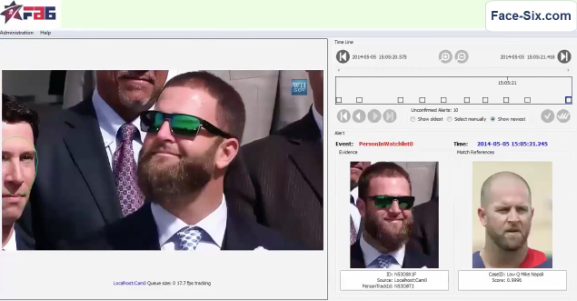 Face-Six's algorithms can identify people even if they're wearing glasses, or have grown a beard, the company says.

What started off as an application to identify actors while watching TV became the Face-Six company, whose first low cost product enables facial recognition from still photos.

“We’re seeing a great demand coming from the market, estimated at $50 billion per year,” says Moshe Greenshpan, the company’s CEO.

It all began four years ago, when an application to identify actors while watching TV was born.

“I’m a movie fun, and when I first came across Shazam, the connection was quite immediate,” says Greenshpan, 43, a resident of Tel Aviv. “The idea to create something similar seemed to be obvious, because you’re always watching a movie and asking yourself, ‘Where do I know that actor from?’ That’s how the idea was born, and we took it further.”

Greenshpan decided to fund the initiative on his own and not raise capital from investors. “I realized that I was much better at finding customers than I was at raising capital,” he explained. “I wouldn’t turn down an investment but I preferred to devote my time to developing the technology and finding customers, instead of putting that aside to devote all my time and energy to raising money.”

“Since the revenue from the app wasn’t on the horizon,” Greenshpan continued, “and I had to carry on funding the company’s activities, the natural way for me was to sell our developments to institutional clients. So, in essence, Face-Six.com was born.”

How does your technology work?

At the start, Greenshpan recruited staff, including a CTO, a chief scientist, three engineers, and an SVP of sales. At first, the company’s employees worked from home, around the clock. In recent months, the staff has been operating out of RishonStartUP, a start-ups compound based in Rishon Letzion, on the suburbs of Tel Aviv. “It’s fun to work in an environment like that,” says Greenshpan, “even if mutual inspiration isn’t intentional. When you’re half listening to things and are exposed to initiatives, it happens along the way.”

In the period of less than a year, the company managed to deploy software pilots at large companies, including an Israeli security organization, security forces of a Caribbean country, one of the largest casinos in Asia, and a criminal identification lab for the Indian government.

What reactions have you had to the pilots?

“In spite of the website’s success and our ability to reach big clients, the complexity of the hardware-software solution, which entails connecting and calibrating cameras and servers, and also the need to be on the client’s site in order to implement the system, made the solution expensive and made the sales cycle too long – between a year and two years, as is customary in this field. In addition, it became clear to us that 99 percent of the thousands of clients that turned to us couldn’t afford paying for an expensive project.”

Were there moments of despair, did you give up?

“We didn’t give up, but there were moments of frustration. When you are good enough to reach big clients, but you don’t succeed in selling – not because the product’s not good, but because it’s expensive – that’s frustrating. We didn’t have to be geniuses to understand that there’s a huge market which hasn’t been tapped yet because of a technological gap and high prices. That, in essence, was how the idea was born to develop low cost applications for the face recognition market.” That was also the point at which the goddess of luck knocked on the door of Greenshpan and his company, when a few clients agreed to fully fund the development of such products.

We remember another Israeli company that dealt with facial recognition, purchased by Facebook.

“That Israeli company [Face.com] was nicely sold to Facebook, primarily thanks to a feature that enabled automatic tagging of friends’ pictures. They also offered a specific solution to developers working with still photos. We are turning to the consumer market, mainly to the end user, with a wide variety of video applications.

Of course, it’s possible to exploit the technology in a harmful way, much like bugging phones or hacking computers. But, as you know, the bottom line is that the responsibility is in the hands of the user. These days, the subject occupies those who fight for freedom and individual privacy, principally in the US. The FBI launched an impressive facial recognition project valued at over $1 billion last year, and the fears are caused mostly by Big Brother policies and less by consumer users.”

First in a series

Last month, the company released its first product in a series of products. The product, called Churchix.com, enables facial recognition from still photos and is part of the event attendance space. “Amazingly,” says Greenshpan, “Churchix was originally developed by us for a chain of international churches, which wanted to follow up with membership attendance at its events. Today it’s being used at a number of other churches in the US and in Indonesia.”

Who is Churchix meant for?

“Because of its capabilities, Churchix is suitable for churches, administrators of communities, for event photographers, and for sports photographers, who are interested in identifying guests and athletes.”

“There is a great interest. Another interested client who began using the software recently is the DNA Bank of India. In India, a large portion of the population doesn’t have identification documents. Since the registration system isn’t fully institutionalized, there’s a big problem in identifying people in government offices. One of the solutions is facial recognition to verify people’s identity. That’s the solution the Bank adopted, and it uses our technology in order to verify the members in its database.”

There’s this perception that the facial recognition market is narrow and niche.

“With the vast experience we’ve accumulated, we can say with full confidence that this perception is completely mistaken. When we talk about the civic face recognition market we mean shops, restaurants, offices, factories, buildings, gyms, home owners and basically everyone with a camera.

We’re seeing a huge demand coming from a market that we estimate at $50 billion per year. As a ground-breaking player in this market, we believe that, God willing, we’ll conquer a big chunk of the market with additional innovative and more complex applications.”

This story originally appeared, in Hebrew, on Geektime.