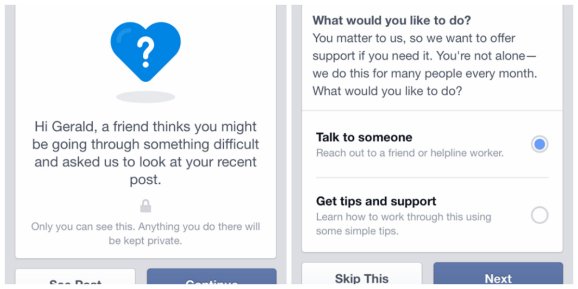 In a significant expansion of its personal crisis features, Facebook announced today that it would be rolling out new services that allow the company to more directly intervene when users post messages that indicate troubled or depressed feelings.

“Today, at our fifth Compassion Research Day, we announced updated tools that provide more resources, advice and support to people who may be struggling with suicidal thoughts and their concerned friends and family members,” the company wrote in a post.

Suicide prevention has been a big issue for Facebook, raising questions of just how far the social media giant should go in monitoring and responding to content that indicates a person may be in distress.

More than three years ago, Facebook created a suicide reporting system that allowed users to fill out a form to report troubling messages. Through a partnership with the National Suicide Prevention Lifeline, Facebook would then send an email to the person who posted the message to suggest they get help if necessary.

In 2012, Facebook also promised it would create more tools to support people who seemed troubled.

To expand those suicide prevention services, Facebook said it worked with a number of mental health organizations, including Forefront, Now Matters Now, Save.org, and the Lifeline.

With the new tools, Facebook plans to move beyond just referring people to other organizations. If someone’s post has been reported as possibly indicating suicidal thoughts, they will now receive a direct message from Facebook asking them if they need help.

The recipient can then click a button indicating they want support, and the message will then ask if they want to connect directly with a friend to talk, or get tips directly from someone at Facebook. The person will still also be encouraged to connect with someone at Lifeline to talk.

Likewise, for the person who reported the messages, Facebook is adding a new feature that lets them call or message the distressed friend. Also, if necessary, that person can also ask for support.

Facebook said the new tools will appear in the next couple of months in the U.S. and Canada. And the company said it is looking to expand similar services around the world.