Sarah Weichel and Caitlin McNeill, the two women behind the dress photo that rocked the Internet on Thursday, have a plan to turn their fifteen seconds of viral fame into a win for young girls.

Weichel reached out to Business Insider late Friday and announced the pair have teamed up to sell “Team #BlackandBlue” and “Team #WhiteandGold” t-shirts, with the proceeds benefiting the Princess Project, an organization that provides free prom dresses to high school girls who can’t afford them.

The shirts commemorate the fact that the dress in the infamous photo appeared to some people to be white and gold, while others saw it as blue and black.

McNeill put the picture on a Tumblr fan page she runs for Weichel, who works with YouTube stars. The picture was originally taken by the mother of one of McNeill’s friends. McNeill told Business Insider the mother took a photo of the dress because she wore it to her daughter’s wedding. When McNeill saw her friends debating the photo on Facebook, she decided to share it on Tumblr and Internet history was made.

The t-shirts are selling for $14.99 on Represent.com and allow the wearer to declare which colors they saw. As of this writing, the site says over 600 t-shirts have been sold and almost twice as many people have chosen “Team #WhiteandGold.”

Check out the shirts below: 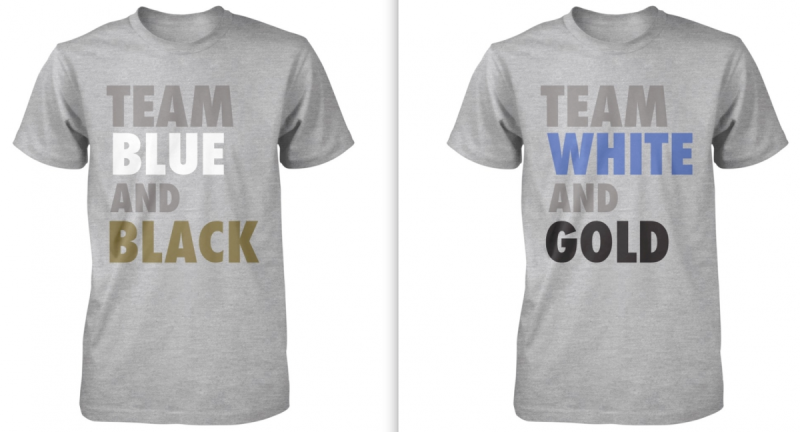