With three million downloads to date, Fleksy’s app is available for Android and iOS and it serves to replace the default keyboard on a user’s device. Armed with $6 million in investment, it was one of a number of companies to capitalize on Apple opening to system-wide keyboards for iOS 8 last year.

Today’s news comes two months after Fleksy first launched branded themes and extensions, the latter of which lets you extend the functionality of the app to include features such as a numbers row, shortcuts, app launchers, an animated GIF search tool, and now a search engine.

With Yahoo on board, this is Fleksy’s first ever Exensions partnership, and it’s designed to make searching the Web more convenient for users. 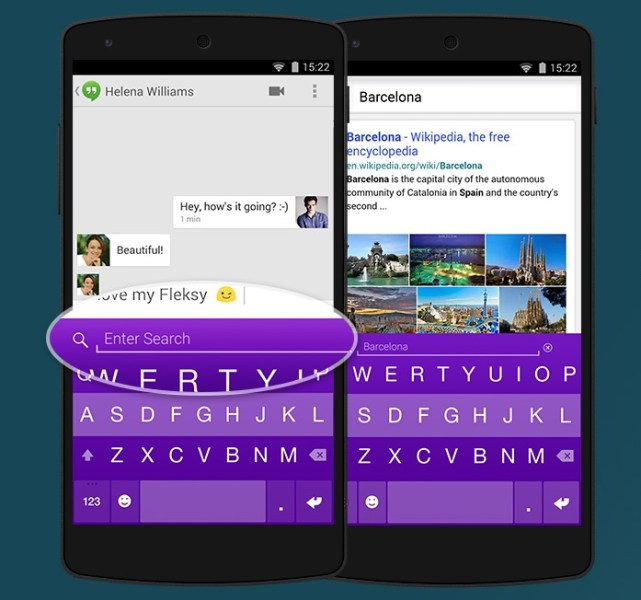 It’s also notable given Yahoo’s recent efforts elsewhere, having inked a deal with Mozilla to replace Google as the default search provider within Firefox. It seems to be working, too, as Yahoo has been regaining some of the search market in the months since.

Fleksy stands to monetize the Yahoo deal in one of two ways.

First, there’s the direct in-app purchase of the Yahoo Extension itself. Users have three available slots they can access for free, so if they’ve already used up three slots — for example, a numbers row, GIFs, and an app launcher — they’ll have to pay to install the Yahoo search button. They can circumvent this by uninstalling one of their existing Extensions, though, thus freeing up a slot.

Second, Fleksy tells VentureBeat that it’s operating a revenue-share model with Yahoo, which works in a similar way to how Yahoo monetizes on other platforms — through third-party ads.

It’s an interesting move, one that could indicate the potential to monetize something that has hitherto been considered a basic utility rather than a marketing tool. Keyboards could become the smartphone equivalent of billboards.

“This partnership marks a major milestone for us,” explained Kosta Eleftheriou, cofounder and CEO of Fleksy. “Due to the keyboard’s high engagement, opened 180 times a day on average, and its position at the front line of mobile interaction, we believe contextual search on the keyboard can present a transformative experience. Partnering to develop Extensions with market leaders such as Yahoo is the first step in advancing that goal.”