Apple today updated its iOS adoption numbers to show that iOS 8 has finally hit the 75 percent mark. We say “finally” because the latest version of the company’s mobile operating system has had a much slower adoption rate compared to its predecessors.

iOS 8 share (which includes iOS 8.1) has taken six months to reach the three-quarter mark. iOS 7 is now on less than a quarter of devices, at 22 percent. Over the past two weeks, iOS 8 stole 2 percentage points from iOS 7. The remaining iOS versions remained flat at 3 percent.

These figures come from the usage of the company’s App Store, presented on the support page for developers: 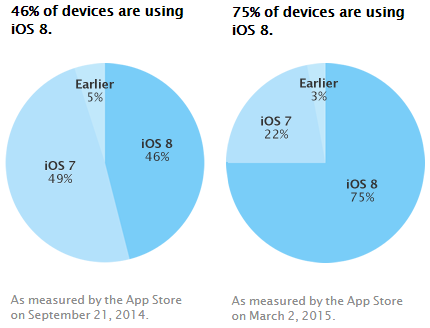 The slower adoption rate of iOS 8 compared to iOS 7 and iOS 6 in the respective time periods was first noticed by third-party tracking sites (most of which rely on ad impressions). The trend was then confirmed by Apple when iOS 8 gained only 1 percentage point less than a month after its release.

Multiple explanations have been offered as to why Apple users have not upgraded to the latest iOS release as quickly as in the past. These include being wary of bugs and not being impressed with the feature set, as well as the size of the update itself (grabbing it over the air requires about 5GB of free space on your device).

Despite all this, Apple has still managed to pull off a 75 percent penetration rate in six months. For iOS, that’s nothing special, but compared to other mobile operating systems, it’s still quite impressive.

The result is developers are more likely to use iOS 8-specific features. This in turn only encourages more users to upgrade as they seek to get new apps and new features in existing apps.

In fact, Apple last month started requiring iOS apps and updates to use the iOS 8 SDK. This was likely the final push needed to get to the 75 percent milestone.