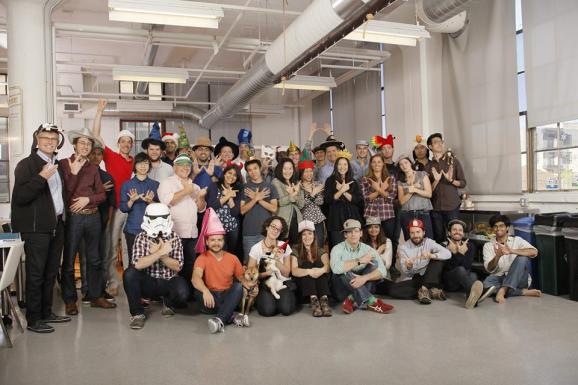 The WibiData team in a picture uploaded to Facebook on Nov. 11.

WibiData, a startup that has helped retailers personalize their websites by capturing and processing large data sets, in recent weeks has laid off several employees.

The startup has appointed vice president of products Rob Seaman as its chief executive. Cofounder Christophe Bisciglia, chief executive until this point, has taken the executive chairman position.

The startup is reorienting itself to better meet the needs of its customers, Bisciglia told VentureBeat in an interview.

“From a product perspective going forward, we’re going to focus much more on the application side of the product and much less on building infrastructure tools for the technologists at our customers,” Bisciglia said.

Concretely, that means less of an emphasis internally on systems for housing vast quantities of information for customers, including the Hadoop open-source software for storing and analyzing lots of different kinds of data. WibiData is now hiring new people who can build an easy-to-use cloud application intended for business users, Bisciglia said.

Building tools on top of Hadoop has not always been the biggest commercial endeavor.

One startup in that domain, Drawn to Scale, shut down in 2013. Last month Datadog bought Mortar Data and said it would shut down the latter startup’s Hadoop service.

In this case, WibiData isn’t closing down, but it will be changing in a substantial way.

“So many … startups do start iterating on something you learn from the market,” Bisciglia said.

Bisciglia declined to say how many people were laid off. VentureBeat was able to identify at least 11 people who stopped working for the startup in January or February.

“I think over the next year, we’ll probably get up to a level that’s not too far off from where we before,” Bisciglia said. “I don’t know if it will be exactly the same.”

Seaman, for his part, joined WibiData in September 2013, after stints at Oracle and SAP and most recently at IRI, which provides software for retailers and other types of companies.

“WibiData started getting interesting when Rob joined us and brought a product perspective,” Bisciglia said.

In the new arrangement, some competition could come from companies like RichRelevance and Certona, as well as Oracle’s Responsys and Salesforce’s ExactTarget — but only based on specific use cases.

“We do not at this time see competition that’s coming at it from a holistic platform perspective, and that’s what’s excites us,” Seaman said.

WibiData started in 2010 under the name Odiago and is based in San Francisco. The startup announced a $15 million funding round in May 2013.

“None of this was motivated by, you know, cash or funding needs or anything like that,” Bisciglia said. He declined to speculate on when the startup would be raising money next.