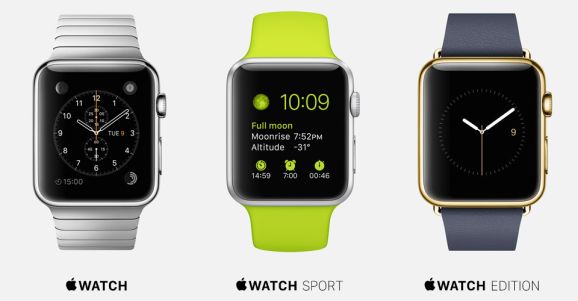 At its Spring Forward event today in San Francisco, Apple revealed all the pricing details of its Apple Watch. Until now, we only knew the Apple Watch had a base price of $349.

The Apple Watch Sport starts at $349 for the 38mm version and $399 for the 42mm version. This collection will be offered in 10 different models.

The Apple Watch Edition (which Apple describes as “crafted from custom rose or yellow 18-karat gold alloys”) starts at $10,000 and appears to cap at $17,000, according to Apple’s online store. Apple chief executive Tim Cook said will be available only in “select retail stores.” This collection will be offered in 8 different models.

While you’re guaranteed to pay a minimum of five-figures for the Apple Watch Edition, Apple didn’t share a maximum price for this tier during its event or in its press release. Given that there will be limited quantity though, Apple will likely not be afraid to push the limit with newer models.

If you didn’t consider Apple to be a company aimed at the high-end market, you definitely should now. Apple is clearly interested in giving its revenues a big boost with this new device.

The Apple Watch is arriving on April 24 in the U.S., the U.K., China, Australia, Canada, France, Germany, Japan, and Hong Kong, with preorders starting on April 10. It will be shown off at various stores in certain locations, and won’t be available everywhere at once.

Apple today also revealed the device will feature up to 18 hours of battery life. Further, the company confirmed all watches will require iOS 8.2 (released today) or later running on your iPhone.