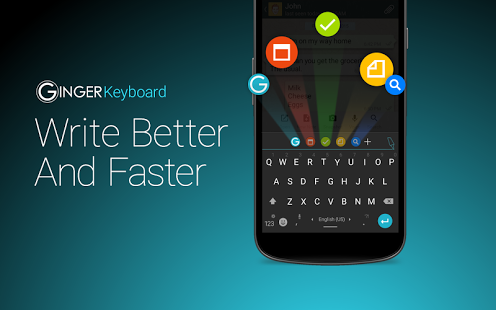 The increasing use of mobile devices for written communication has made mobile typing an important aspect of our daily life. However, typing on a touch keyboard can be painfully slow and filled with typos because of the difficulty of the small screen. An already tough job is even harder for those using a second language, such as English, the de facto global language.

However, the Tel Aviv-headquartered startup Ginger Software is addressing both of these problems with its mobile proofreading keyboard app. Ginger specializes in developing mobile and writing enhancement apps that enable users to write better English and to type faster in over 60 languages.

Powered by its patented NLA (natural language analysis) engine and big data, Ginger detects spelling and grammar mistakes based on the word context and gives alternative expressions to enrich your language.

Besides its typing tools, Ginger has added a series of features that go beyond keyboard functionality. Aiming to increase user productivity while driving engagement on other apps, Ginger recently added “Smart Bar” for its Android Keyboard, allowing users to access their favorite apps directly from the keyboard while staying focused on their interaction with others.

“We found that our users routinely rotate between apps and Ginger Keyboard while communicating with friends, when opening other tasks, scheduling events or searching for something. Smart Bar is not only a simple launcher, it features all kinds of productivity functions like a calendar, to-do search, note-taking, search and so forth, which users can customize by removing or adding any app they like,” company CEO Maoz Shacht told TechNode.

Ginger has added emoji arts and contextual strikers to enrich user interactions. New features like one-to-one video, casual games, and news are expected to launch very soon so that users can make the best use of their time while waiting for responses from friends, Shacht said.

However, these new features are now only available for Android users. Shacht disclosed that they shifted focus to mobile apps a year ago, and the iOS, desktop, and web browser versions are being worked on so as to unify the products and provide cross-device services for users.

Although the app aims to help ESL learners to write better English, many of its users are native speakers from the U.S. and U.K.; some 50 percent of their new users are from U.S. The company’s VP Guy Melamed explained that users on both ends of the language proficiency scale can enjoy Ginger. On the one hand, Ginger helps ESL users improve their English and avoid mistakes. On the other hand, it allows native speakers to type more easily, and reduces the number of their mistakes, too. Other users are mainly from Latin America, Mexico, Brazil, Russia, and Europe.

China and Asia are the logical destinations for Ginger, given the huge market potential. Shacht acknowledged that Ginger’s current distribution in China is very narrow. “After making a few mistakes as we entered this new market, we’ve been exploring China in a more structured way over the past four/five months and we’ve started seeing the results of that,” he said.

Backed by Li Ka-shing’s Horizons Ventures, Ginger has partnered with one of biggest telecom carriers in Hong Kong to distribute its keyboard. Its Android keyboard is now available on Xiaomi Store, and the company is in talks with other partners to beef up the lineup.

The company has initiated a series of moves to localize the service. “We’ve invested a lot of time to develop Chinese input methods, adding two autocorrect and handwriting input methods, to find a Chinese partner to adapt Ginger to the Chinese market, and to adjust the product to the Chinese way of thinking,” said Melamed. The Ginger Keyboard app on Xiaomi Store, which currently offers English descriptions, will have Chinese descriptions in the coming months.

The improvement of input methods has left little innovation space for keyboard apps. But Shacht believes that keyboards will stay with us while adding more contextual features to improve the convenience and fun of typing. The services to lead the market will be those with contextual awareness for users’ situations or behaviors.

You may have heard of Ginger following Intel’s acquisition of its personal assistant platform last year. It remains an independent company focusing on its product line of intelligent grammar and spell checking software.

Coming from the Startup Nation, Ginger’s growth has been greatly influenced by the Israeli entrepreneurial culture. Shacht says this culture originates from having served in the military. From that experience, they learned how to address the same question from fresh angles, to be relentless in solving tough problems, and the importance of collaboration and sharing knowledge.

Israeli startups are attracting massive capital injections from overseas VCs, with the investment total for 2014 double that of 2013, according to Shacht. He noted that foreign VCs help Israeli startups to connect with the right partners and cooperate other portfolio partners, giving lots of additional value to the businesses other than funding.