SONOMA, Calif. — As I clicked the little red button on the screen, the drone in front of me leaped into the air, soared to about 250 feet above the ground, and then began methodically flying back and forth in a lawnmower pattern a hundred yards or so away, all the while taking photos.

In the past, I would have had to wait hours after the drone landed and I’d downloaded the pictures for third-party software to stitch them together into a single image that I could use as a map of the vineyard stretching out on the horizon. But today, even as the drone was still above me, the photos were appearing on the mobile phone and already being stitched into a map.

I had come here to wine country to see a demo of drone-based mapping and 3D modeling technology from San Francisco startup DroneDeploy, which has been developing software that can autonomously control consumer- and enterprise-grade drones, as well as manage imagery taken by the flying devices.

Earlier today, the company announced a $9 million Series A round led by Emergence Capital, bringing its total funding to $11 million. Here, at an invite-only event held at the Ram’s Gate winery, surrounded by lush green grapevines, the company was showing off what its technology can now do for customers in the agriculture, construction, and mining industries.

The demonstration was of DroneDeploy’s brand-new app — for iOS and Android — and the San Francisco startup’s software automatic integration with DJI drones. As DroneDeploy cofounder and chief executive Mike Winn put it, the company has built what might be the world’s-first real-time mapping technology, something even Google and NASA can’t do.

Iain Butler, a developer of software for drones, told VentureBeat that until he’d seen a demo of DroneDeploy’s technology, he didn’t think it was possible to put together a properly stitched map based on images taken by a drone in less than seven hours or so. But he said Winn promised it was possible in 15 minutes. A skeptic until he saw the demo, Butler is now a convert. And here’s why: As Winn explained, “In some cases, 90 percent of the data is returned before the drone even returns to land.”

China’s DJI has become the world’s best-selling drone manufacturer. Every day, the company sells about 2,000 of its devices. So partnering with the company is a big feather in DroneDeploy’s cap. 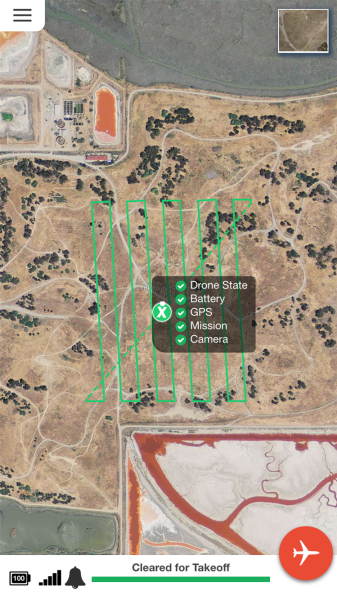 Above: The app shows that the survey route is planned and the drone is ready to fly.

Now integrated with DJI’s Phone 2 Vision+ drones, as well as those from 3D Robotics and AgEagle, DroneDeploy’s software is meant to allow autonomous control of the flying devices with just a few taps on a mobile app. “This takes [DJI’s Phantom drones] from being a hobbyist toy and makes them a real tool,” said CTO and cofounder Nick Pilkington.

For now, the DJI integration only works on Android devices, but DroneDeploy says iOS functionality should be added within about two months.

Upon launching the app, a user sees an aerial image of their current location. Then they tap the screen to define an area — which is customizable — they’d like to survey for mapping purposes. The app then does a few safety checks in the background, and once it’s ready, a button shows up to start flying. Tap that button and the drone takes off and begins the survey — with no manual control by the user at all.

That’s key, DroneDeploy believes, because the devices are not always easy to control in flight, especially in rough weather. But with this app connected to a drone, the software does all the work.

What really makes it worth its price of $99 a month is its ability to send the drones on those surveys and autonomously work on the map even as the device is still in the air. And it’s up to the user to determine whether they’re interested in a high-resolution, up-close look at something like a construction site, or a broader, lower-resolution look at, say, a corn field.

According to Pilkington, the app allows the drone to autonomously fly over almost any terrain because it correlates the GPS coordinates of the location with a geographical database. That means that while the drone is in flight, the software knows what the device might encounter, and how to avoid it.

Now, as DroneDeploy moves forward, it is getting ready to add more drone manufacturer partners. The startup will use its new funding to build out its engineering team. Winn said the company also hopes to enhance its software so that it can proactively detect problems for clients like railroad owners. The idea, he said, is that the software could survey tracks and look for, and identify, obstacles. If any are discovered, Winn added, the app could automatically inform the railway.