The PC market is back to its freefalling ways. Both Gartner and IDC agree: PC shipments are down, and the main reason is because the Windows XP replacement cycle is fading.

As you can see in the chart above, Gartner says Lenovo and HP were the only two vendors among the top five that experienced an increase in PC shipments. For the first time in six quarters, Dell experienced a worldwide PC shipment decline compared with a year ago. 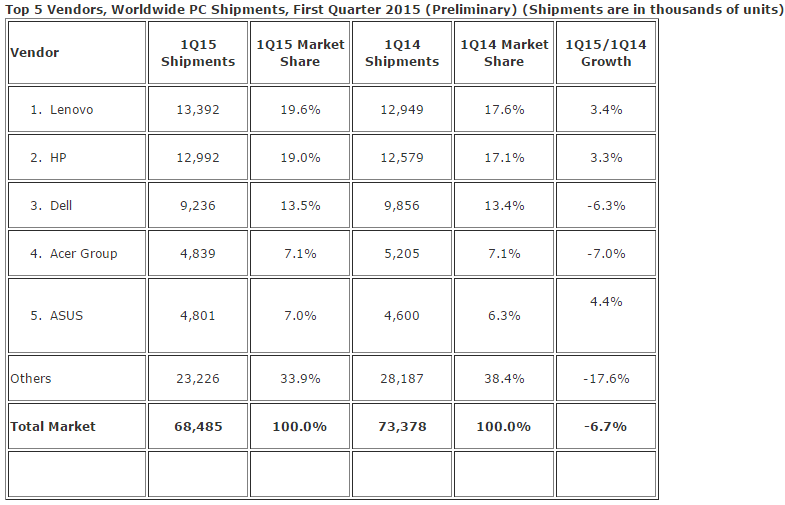 IDC agrees with Gartner that Lenovo and HP were both up, while Dell and Acer were both down. It estimates Asus grew this past quarter, though, effectively tying Acer for fourth place.

The reason for the drop is simple: The PC market’s small gains in 2014 were just a blip. Windows XP support ended on April 8, 2014. Businesses thus scrambled to buy new computers and upgrade their way to Windows 7 or Windows 8.

This year, while many businesses are still stuck on Windows XP, the big rush has started to fade. In regards to the rest of the year, Gartner’s analysts are a little more positive than IDC’s.

“However, this decline is not necessarily a sign of sluggish overall PC sales long term,” Mikako Kitagawa, principal analyst at Gartner, said in a statement. “Mobile PCs, including notebooks, hybrid and Windows tablets, grew compared with a year ago. The first quarter results support our projection of a moderate decline of PC shipments in 2015, which will lead to a slow, consistent growth stage for the next five years.”

“Although shipments did exceed an already cautious forecast, the market unfortunately remains heavily dependent on pricing being a major driver, with entry SKU volume masking a still tenuous demand for higher priced systems that is needed to sustain a more diverse PC ecosystem,” Jay Chou, senior research analyst at IDC, said in a statement. “Pricing pressure is bringing many premium SKUs into formerly mid-level pricing tiers. As more vendors find it increasingly difficult to compete, we can expect additional consolidation in the PC market.”