PETALUMA, California — Companies across a wide range of industries, from mining to oil and gas exploration to surveying and mapping, could have an easier time than ever integrating drones into their businesses thanks to a new end-to-end hardware, software, and cloud services operating system for drones.

Known as the Aerial Information Platform, the system from San Francisco’s Airware is meant to give enterprises a clear path to using drones, regardless of the type of mission or level of expertise they have.

During a launch event at a farm in this sleepy Northern California town Tuesday, Airware and a group of its first customers explained how the platform could help make drones ubiquitous across the enterprise, in large part by standardizing the flight-control, sensor, and data-analysis tools that until now have only been available piecemeal from a variety of providers.

At launch today, the subscription-based system comprises Airware’s flight core: its autopilot system that runs the Airware flight software; its ground-control station tool, a Windows app for desktop computers or tablets that is used to plot flights and control drones; and its configuration manager software, which allows for quick tailoring of drone software and hardware. 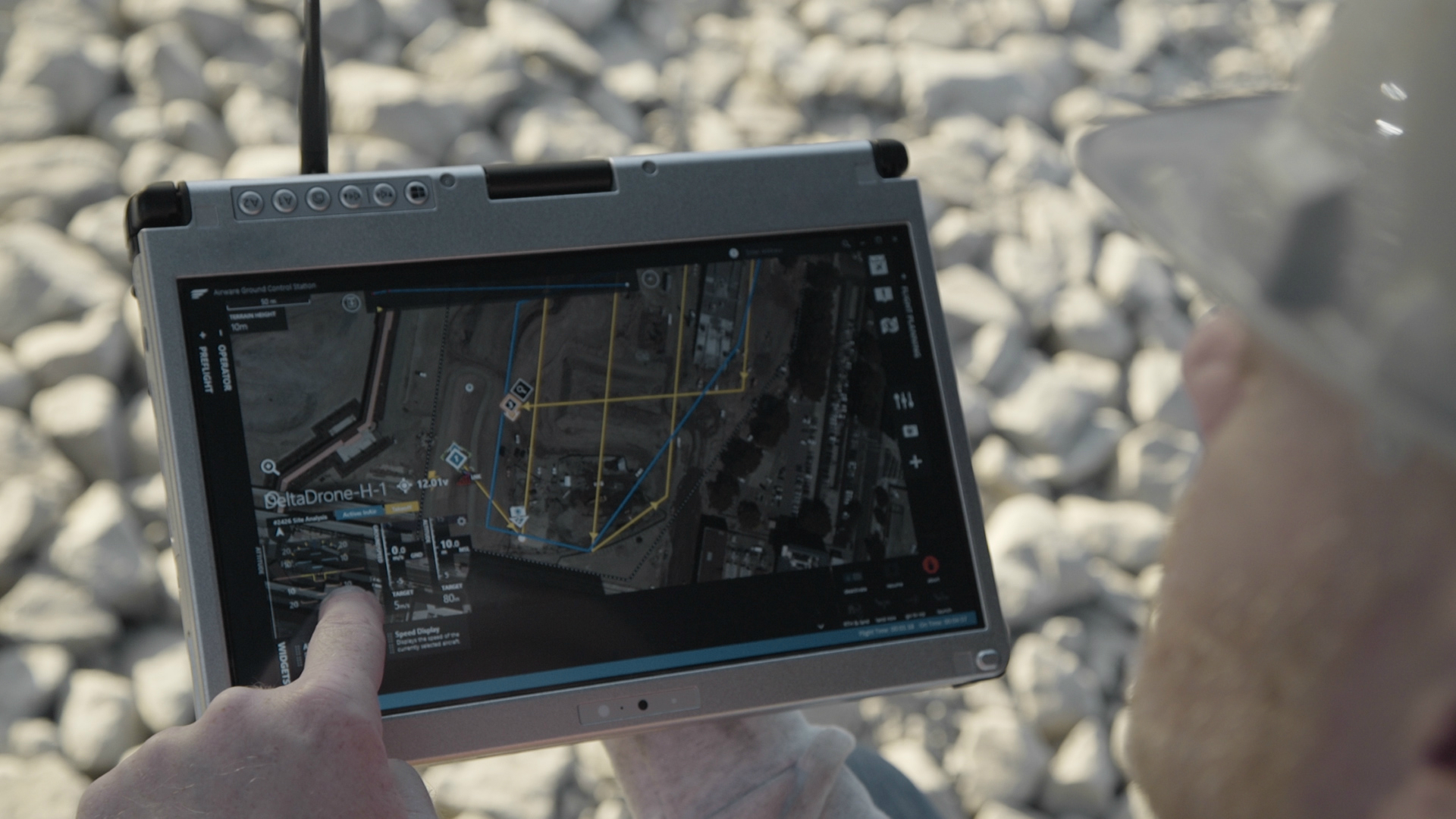 Above: Airware’s platform works on desktop or tablet computers, and allows field operators to set a variety of parameters.

In the coming months, the platform will also allow enterprises to control the software and drones remotely via the cloud, as well as analyze sensor data and integrate it with existing business software systems. Also this summer, Airware will introduce its app core, a small Linux computer, and related APIs that will let third-party developers build apps for Airware’s and other developers’ hardware and software.

Airware, which has raised $40 million in venture funding from investors like Andreessen Horowitz, Kleiner Perkins Caufield & Byers, First Round Capital, Google Ventures, Intel Capital, and GE Ventures, graduated from the prestigious Y Combinator accelerator in 2013. Its idea, CEO and founder Jonathan Downey told a group gathered at the farm, has long been to make commercial drone usage not just possible in the enterprise, but simple to tailor to almost any business a company is in.

Of course, commercial drone usage is regulated in the United States by the Federal Aviation Administration. In February, the agency issued new guidelines that would limit the use of non-recreational unmanned aerial vehicles to an altitude of 500 feet or less, a weight of 55 pounds or less, and a speed of 100 miles an hour or less. Airware is betting that enterprises will count on its platform to keep their drones within those restrictions.

An example of enterprise use of drones is how a farmer might use the device — to monitor crops or livestock, to check whether there’s damage on a fence line, or to see the water level of a remote creek.

“Drones are going to change the way people do their jobs,” Downey said, “in every industry.”

But until now, he added, using drones in the enterprise has been as inefficient as using a paper map is compared to using GPS. And that’s why Airware developed its new platform, a project four years in the making.

At its heart, Downey said, the Aerial Information Platform supports just about any kind of sensor an enterprise might want to put on a drone, as well as any rotor-based drone (and soon, fixed-wing devices as well). It also makes it possible for third-party developers to build applications that can plug into the platform, expanding what it can do.

At the same time, the system was designed to make data collection, analysis, and distribution scalable without requiring complicated additional tools, the company said.

And while the user interfaces on existing enterprise-class drone software have generally been built to be used by engineers and pilots, Downey said Airware wants to build a customer base among utility companies, search and rescue operations, mining businesses, and others with little or no previous drone flying or operating experience. “Large companies are interested” in drones, he said, “but they needed solutions tailored to their industries.”

According to Buddy Michini, Airware’s chief technology officer and cofounder, today an enterprise that wanted to incorporate drones into the workflow would have to choose from a variety of airframes, buy an auto-pilot system, decide on the sensors they want to use in order to collect data and integrate them onto the airframe, and finally write the software that ties it all together, collects the data, and analyzes it in order to generate actionable information. 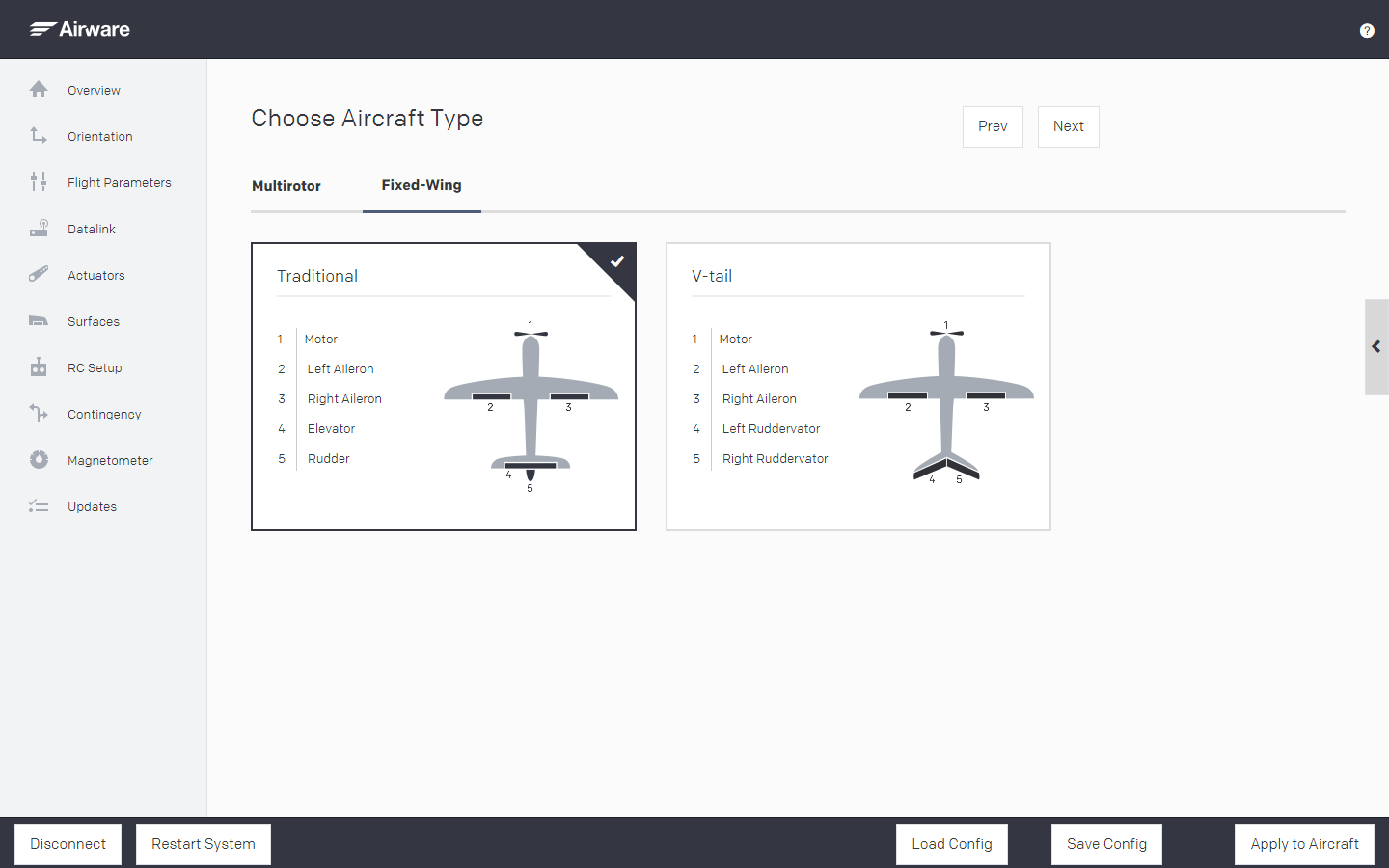 Above: Airware’s platform lets customers integrate with any type of airframe.

With Airware’s platform, Michini said, all of that work can brought into a single technology framework that can be applied regardless of the airframe, sensors, or goals. Yet the platform can also easily be customized to meet companies’ needs, he added.

Using the farm example, Michini explained that using Airware’s platform, an industrial farming company could be certain that its drone would stay safely inside the confines of a predetermined geographical polygon — the geofence — and that a field operator would not be able to change those parameters. Yet the field operator could change things like the launch area if, for example, a cow wandered into it and laid down. 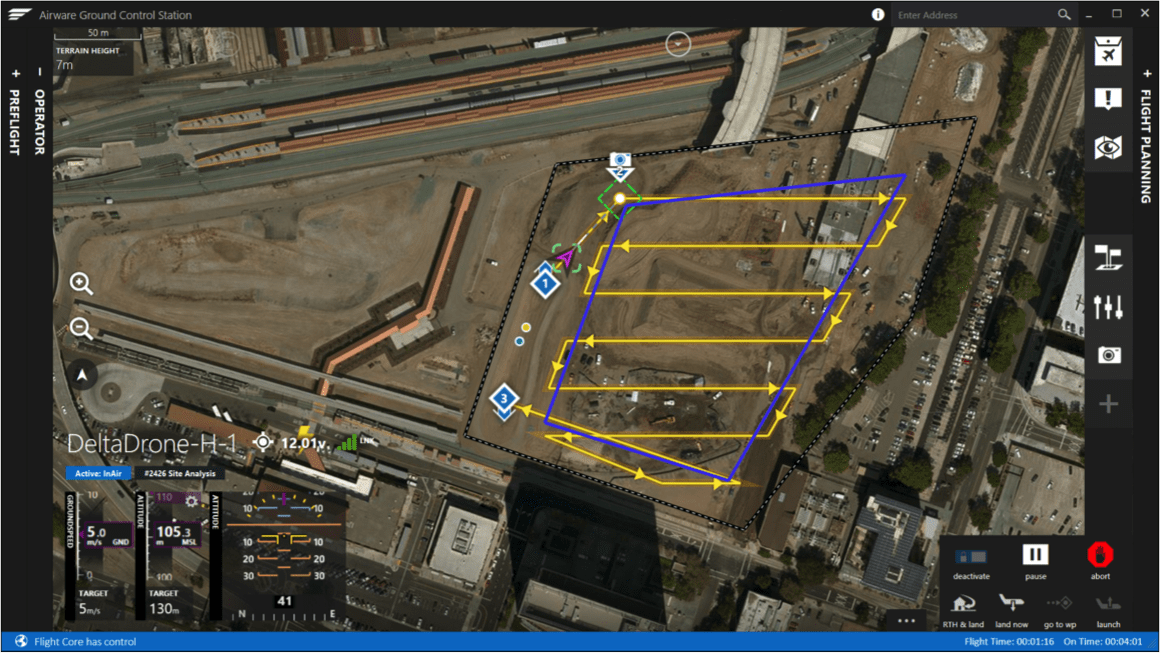 Above: Once a flight plan is set up, a drone running off of Airware’s platform autonomously flies the prescribed route, collecting data that is stored on board for later distribution.

Setting up a survey area is simple and quick. Michini showed that it can be done with just a few steps: clicking on a digital map to set the starting point, entering altitude and speed parameters, and choosing camera settings. Then the operator drags the corners of a polygon to set the geofence, and the drone is ready to go.

Once the drone launches, the parameters of the flight are all stored on board, in case communications are lost. That, like much of the Airware system, is geared towards ensuring safety, a big concern of enterprises given a regulatory environment that limits how drones can be used commercially.

Although the Aerial Information Platform was designed to be easy to set up and configure, Airware expects that in most cases, it will be purchased by businesses familiar with drones that will then operate it for end-customers. That’s why its initial customers include companies like GE Ventures, Infinigy, Drone America, Altavian, Allied Drones, and Delta Drone.

Joshua Kornoff, the CEO of Allied Drones, explained that his company, which makes customized unmanned aerial vehicles, has customers that want drones for radiation sensing, surveying and mapping, and monitoring mines. Kornoff said Airware’s platform helps Allied Drones solve the problem of integrating sensors and autopilot onto different airframes. “This allows us to standardize,” he said. “Airware allows us to do each type of airframe with one [platform].” Above: Airware’s FlightCore, a small Linux computer that can be mounted on a drone.

Mike Richards, the president and CEO of Drone America, which makes UAVs meant for search and rescue operations, said he’s hopeful being able to integrate Airware’s platform onto each of his company’s drones will help simplify the work it takes to get the flying devices operational for its public and private-sector clients.

And Alex Tepper, the managing director at GE Ventures, said that Airware will help it provide aerial services to clients with wind turbines, oil and gas pipelines, and other operations by making it easy to integrate all the hardware and software. As well, Tepper said that Airware — in which GE Ventures is an investor — brings valuable business-side expertise when it comes to talking to federal regulators.

For its part, Airware has been readying its platform for some time. But Downey said now was the time to launch because the company has reached several important milestones. Among them are integrating the system on multiple vehicles, in multiple countries, and with multiple use cases.

“This is the moment in time,” Downey said, “when we’ve reached serious traction in all those areas.”