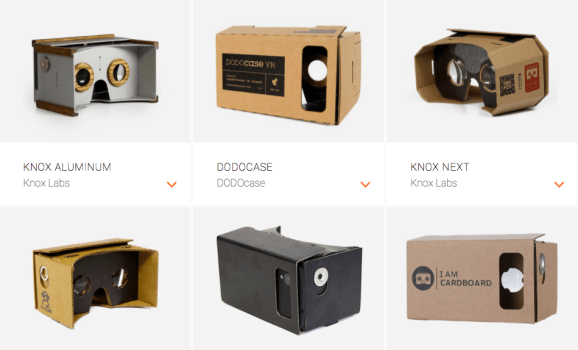 A selection of the many Google Cardboard viewers available now.

Google Cardboard has seen an explosion of new third-party viewers spring up since its launch about a year ago, and this has the company responding with a new certification standard today called “Works With Google Cardboard.” It’s a way to certify manufacturers of these fold-together cardboard viewers as well as support the varied builds through the Cardboard software. This standard opens the door for anyone with a smartphone to try VR. The low-tech, smartphone-friendly Cardboard scene is just one segment of the rapidly growing virtual reality market, which is expect to hit $150 billion by 2020.

The standard also extends to apps and games. Google’s developer blog says that manufactures can apply for certification badges for the program starting today at the Cardboard website.

The Works With Google Glass standard has manufacturers clearing the builds of these viewers with Google so that the software can adjust for differences in optics and versions, ensuring an optimal experience for users across the board. A QR code specific to the viewer will be generated for placement on the device so that the user can simply scan the code for instant optimization.

Google’s virtual reality solution also gets its own software design guidelines and an updated SDK, with the latter seeing improved head-tracking and drift correction. Of course, this all works with the new Works With Google Cardboard program to ensure compatibility with the growing selection of viewers.