Conversion Rate Optimization (CRO) is one of the fastest growing marketing tactics sweeping across the globe. With strong venture backing across the board, companies such as Optimizely ($88M in funding) are looking to continue growing the space as far as the eye can see.

In VB Insight’s latest report, Conversion Optimization: How to win at performance marketing, over 36 vendors (including Google Analytics, Kissmetrics, Optimizely, Unbounce, Adobe…etc) are evaluated within the CRO space. What’s clear from the report is that the space is growing rapidly and will be a part of every marketers technology stack within 5 years and perhaps sooner.

But for those of us that are marketers looking for any competitive advantage we can find, the CRO space could be the area you’ve been looking for right now. Consider CRO adoption rate by industry, shown below exclusively from VB Insight’s Conversion Optimization report: 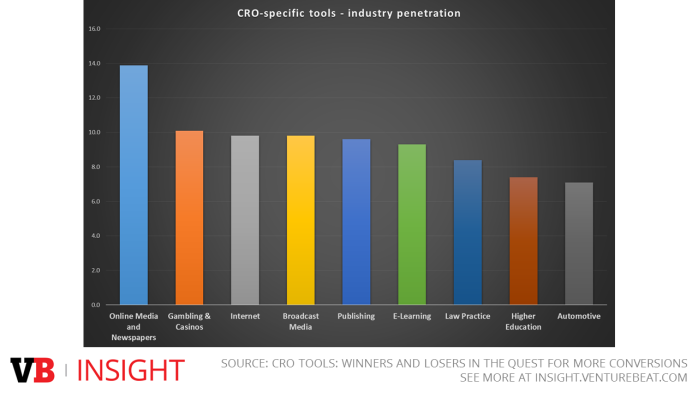 The two takeaways immediately visible are that overall adoption rate has a significant amount of room to grow, and that most internet companies aren’t investing seriously in CRO tools… yet.

For those of you that already have at least one employee or team dedicated to working full-time on conversion rate optimization (whether part of an analytics team or specifically mastering CRO tools) then this information is yesterday’s news. For those of you that don’t, you’re missing out and a window of competitive opportunity is closing fast.

While it may seem like having employees be 100 percent dedicated to conversion rate is too narrow of a scope, consider the impact that increasing your conversion rate by 223 percent could have on your business. While that percentage may seem random, 223 percent is the average increase in ROI that companies experience after working with a CRO tool as highlighted in VB Insight’s Conversion Optimization Report.

What’s also interesting to notice about the preceding adoption rate by industry chart is to look at some of the industries that while usually laggards, are instead acting as the early adopters, or in some cases early majority.

Think about the legal industry for instance. Have you ever considered “legal” to be at the cutting edge of technology adoption? Didn’t think so, however, the space happens to be one of the most competitive industries with certain cases netting millions in revenue for clients, law firms, and agencies. Under that purview, you can imagine why utilizing CRO tools make so much sense. If you can understand how to attract the best top of the funnel audience, and then segment by quality and relevancy to consistently drive the most profitable clients/customers it’s game over.

If the laggards are operating like the early adopters, that could be a compelling sign for you to consider. While a portion of VB Insight’s report examines the 10 industries as seen below, representing 343,985 companies, there’s a lot more to learn.

If you haven’t taken the time to seriously consider Conversion Rate Optimization tools, perhaps now is the time to learn more. Using Google Analytics at a high level has become second nature to marketers, but taking the next step is another story and not one that the majority is familiar with regardless of industry. The good news, is that there’s plenty of information out there for you to consider as well as meaningful events for you to attend and converse with industry leaders and colleagues to learn as much as you can about the state of CRO in 2015.

Dan Slagen is a marketing executive based in Boston. A frequent speaker and guest blogger at VentureBeat, Dan has been featured in the New York Times, Bloomberg TV and the WSJ. He currently advises startups, marketplaces, and marketing departments on strategy, revenue growth, and operations. You can follow him on Twitter @DanSlagen.