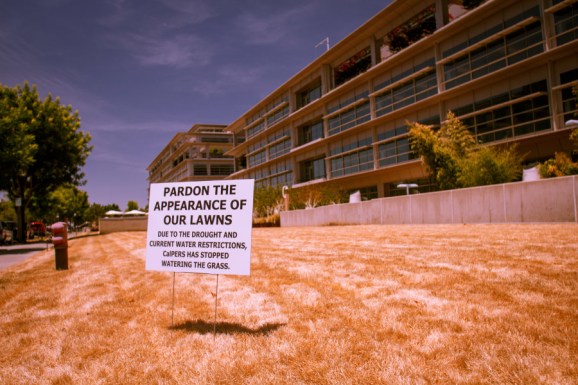 California is finally admitting it has a problem. The lack of rainfall has been snowballing for years, but now average consumers will feel the pain directly through water rationing and utility prices.

Much of the focus has been on the first-ever water restrictions California Gov. Jerry Brown has mandated, particularly on his call for a 25% reduction in urban use. But it’s ridiculous to pretend we can solve this without tackling agriculture, which uses 80% of California’s surface and groundwater. Up to 60% of that water is wasted because of irrigation leaks, over-watering, evaporation, crop types, and other factors.

To make matters worse, the past century has been among California’s wettest of the last seven thousand years, so this isn’t a short-term cyclical drought problem. And the triple threat of expanding populations, climate change, and water rights applies to almost all states and countries, not just California.

So what can we do about it? After all, food is clearly more important than green lawns and California supplies more than half of the United States’ produce.

Simply cutting down all the almond trees isn’t going to solve everything. And desalination isn’t a magic bullet either. The good news is that we’ve solved this kind of problem before.

Between the 1940s and 1960s, the Green Revolution revolutionized farming with new techniques and technology. By feeding the world’s exploding population with less farmers and greater crop yield, over a billion people were saved from starvation.

Solving today’s challenges will also will rely on rapidly deploying a mix of technologies simultaneously. Namely drones, fields of sensors, and real-time data. Together, these technologies also form core elements of the Internet of Things.

While we can’t manufacture enough water to make up for our deficit in H20, we can use it more efficiently than ever before. I call this the “Blue Revolution.”

Sanjay Rajpoot, CEO and Co-founder of FarmX, believes the future lays in enabling agriculture to enjoy the manufacturing efficiencies other industries achieved decades ago.

“Agriculture is one of the vast greenfield opportunities where there has been a pervasive distrust of technology and lack of connectivity,” says Rajpoot. “The depletion of water, upon which the $50 billion California industry depends, creates an innovation imperative that will move the whole industry forward.”

Getting over the barriers

There are three core areas that discourage innovation and adoption of emerging tech in agriculture:

“Farmers cannot tolerate the downside risk that an investment may fail to deliver, so they will wait until the benefits of a solution are precisely known before committing capital,” points out Rajpoot.

Given the above challenges, I believe the following would change the conversation and have the biggest impact:

At heart, the Internet of Things is about devices that can nudge our not-so-healthy habits towards positive goals, whether it’s exercising more or saving water.

I grew up next to a dairy farm in a state dominated by agriculture, so I know firsthand that farming isn’t an easy job even with ample water.

Building a resilient, connected network to compliment nature’s complex ecoystems has appeal beyond just water efficiency. It has the potential to change our relationship to food and perhaps even undo the less savory sides of mass food production.

But we will have to involve people outside the previous orbit of agriculture — and just as importantly, get multiple fields to work together.

Afterall, water and food are not just farmer problems, but ultimately ours too.

Learn more about the Internet of Things and hear FarmX founder Sanjay Rajpoot at the Future of IoT event in San Francisco April 23rd.

A native of Vermont, Tim Wagner is the innovation strategist for btrax, which works with top brands expanding to Asia such as Square, Sony, Expedia, Nissan and Habitat for Humanity. He has founded two companies, advises several startups, speaks at tech events, and writes about creating human-centered products and communities.