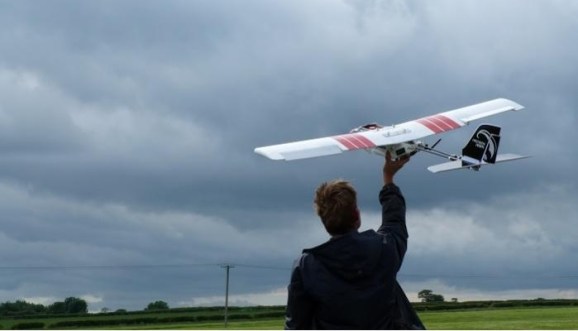 It is currently illegal in the United States to fly drones for commercial use. However, in 2012 the Federal Aviation Association Modernization and Reform Act enabled the Secretary of Transportation to grant exemptions to approved companies that requested to use them. The first was granted last September and as of publication, 159 exemptions have been given to companies interested in using drones for agriculture, motion pictures, surveying and other operations.

While Amazon garnered the most media and consumer attention after announcing its goal of bringing drone delivery services to customers, one of the world’s largest industries has been positioning itself for years to take advantage of robotic flight: insurance.

Using drones for research and development at USAA

USAA, an insurer with more than 10 million members, was granted two different exemptions earlier this month. The company has been researching and developing drone technology since 2010.

Kathleen Swain, USAA’s Innovation Advisor and a licensed FAA commercial pilot, said five years ago the drone community was not fully developed for the commercial market, so companies began high-level independent research. The insurer partnered with PrecisionHawk, a drone manufacturer in North Carolina, and used the technology whenever possible within the narrow guidelines and laws that apply to unmanned aircraft systems in the United States.

More recently, USAA used drones in conjunction with Texas A&M University’s Roboticists Without Borders to survey Oso, Wash. after a mudslide consumed a nearby rural neighborhood in 2014. The company also continued its own independent testing until it received the exemptions, expanding the breadth of its drone program.

The first exemption granted April 2 allows USAA to “operate an unmanned aircraft system (UAS) to conduct research and development” within specific guidelines. The PrecisionHawk Lancaster drone (the aircraft stated in the exemption request) is the only drone the company is permitted to use at this time. The drone has a 4-foot wingspan, weighs 41 pounds and looks like a small propeller plane. It’s stored inside a carrying case small enough to be checked onto commercial airliners.

The Lancaster can be ready to fly in five minutes and does not require a license to operate, PrecisionHawk spokesperson Lia Reich said. The operator gives the Lancaster a toss, the drone flies a preprogrammed route, collects data, and lands safely.

Drone imagery and data will be used for claims in catastrophes

That ease and mobility means plenty of opportunities for testing, and Swain said catastrophe situations are the perfect entry point for USAA into commercial drones based on the need.

“We’re looking to utilize that imagery and data in our claims process after disasters, not only to be safer, so there aren’t so many feet on the ground after a disaster, but also more efficient for our membership,” Swain said.

USAA’s second exemption, granted April 8, permits the organization to do that. In the event of a situation where the volume of claims to USAA from a specific area might be high, the company can send a PrecisionHawk Lancaster drone to collect images and data.

StateFarm, AIG, and Erie Insurance have also been granted exemptions allowing for the testing or use of drones commercially, and many others are interested.

Lisa Ellman, co-chair of the Unmanned Aircraft Systems Practice Group at McKenna Long & Aldridge, said there were fewer than 10 clients when she joined in August. Now, the group has more than 100 clients, some being insurance companies.

“The world is really just waking up to the potential of the use of drones in our country,” she said.

Before joining the firm, Ellman was a Senior Counsel in the Justice Department where she led the Working Group on Domestic Use of Unmanned Aircraft Systems. But even she has questions when it comes to commercial drone flights — which most people likely don’t know could be happening right above them.

“While the safety issues are very important, what the American public is actually very focused on is privacy,” Ellman said. “What happens if I’m an insurance company, or any company, operating a drone and I pick up images with my camera, what are we doing with those images? How long do we hold onto it? What if we see something?”

Those things are still unanswered because it’s hard for legislation to evolve at the pace of technology. But Ellman is optimistic.

“As the technology improves, I think we will see the policymaking evolve in a way that is very exciting for the industry, including the insurance industry,” she said.

The comment period following the Small UAS Notice of Proposed Rulemaking ends April 24, and a decision by the FAA isn’t expected until late this year or sometime in 2016.

Michael Thrasher is a reporter at ValuePenguin. He previously covered major retail brands at Business Insider and crime at The Athens Messenger.

[This story originally appeared on ValuePenguin.]