The curved glass display on Samsung’s new Galaxy S6 Edge smartphone could cost between $200 and $260 to replace, and the replacement screen is not covered under warranty.

The glass of the Edge’s display is curved downward on both sides, while the screens of most smartphones are flat.

Samsung says it charges $200 to replace the Edge’s display. A call to Samsung Service and Support confirmed this. The phone rep prefaced his remarks by saying “Hmmm it’s pretty expensive” before quoting me the price. He added that the price could be more, depending on what the service techs see when they get the busted device up on the bench.

The Samsung rep also informed me that the screen replacement is not covered under warranty. He explained that that’s because Samsung has to pay a high price for each screen.

It could also be that Samsung is subsidizing the screens to keep the price down. One supplier we spoke with at Mobile World Congress said a replacement Edge display could cost up to $300.

According to www.phonescreenrepair.org, it usually costs between $50 and $170 to repair a cracked smartphone screen, depending upon the model of the phone.

And lest you think there’s little risk of the Edge’s screen breaking, consider Square Trade’s recent break test results. The S6 Edge received the worst score possible in Square Trade’s bendability test (when the phone bends the screen usually breaks), scoring even worse than the iPhone 6, which was as at the center of the “Bendgate” controversy. Overall, the Edge was rated “medium risk” for breakage.

If the replacement screens aren’t covered under warrantee, I reasoned, an owner might just as well go to a third party third party smartphone repair service. But I found no promising options in that direction.

A Samsung-certified repair shop, Cell Phone Repair (CPR) in Mountain View, California, quoted me a price of $259 to replace the screen on a broken Edge phone. The proprietor added that the part itself can’t be bought even from off-brand suppliers for any less than $170. And that doesn’t include labor costs.

For the cost of the Edge’s replacement screen you could almost buy a $299 unlocked 16GB OnePlus One smartphone that’s arguably a better phone than the Edge. Or a new 32MB HTC One on eBay. 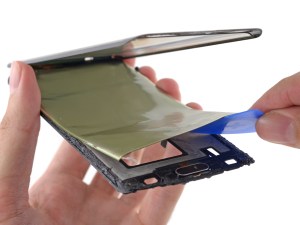 Above: Samsung’s Super AMOLED display is what allows for the smooth curves on this screen. Riding on the back of the display is the customary touchscreen controller.

Aside from the high price, it’s hard to find anybody other than Samsung who can replace a broken Edge screen.

A uBreakiFix shop in Sacramento, California said that it would be several weeks before it could get the replacement screens. The national smartphone repair company, iCracked, said the same thing.

Only two or three places in the country even sell an after-market version of the screen at this time, one repair shop told me.

To be fair, replacing an iPhone 6 screen is no picnic, either. That will run you about $150, according to iCracked.

As I said in my review of the Galaxy S6 Edge, the image and video quality produced by the AMOLED display is among the best I’ve seen on any smartphone. But the display is breakable, and surprisingly expensive to repair. So a good phone case, and maybe an insurance policy, might be especially wise for Edge owners.