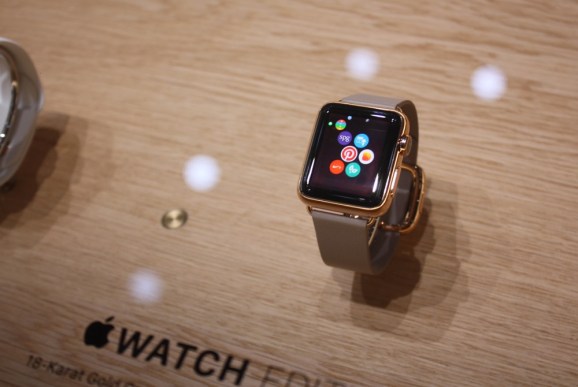 After many months of anticipation, the day finally comes: The launch day for the Apple Watch. But you’ll see no long lines around around the Apple Store. No clapping Apple store reps. No overjoyed owners of some new Apple gadget.

Instead it’s quiet. In truth the launch of the Apple Watch is happening, for the most part, on the Internet.

The real launch of the Watch happened in the first minutes of April 10 with the start of preorders. By the end of that day, almost a million had been sold. However, the delivery dates for the Watches started, in the best-case scenario, at April 24, and most people who preordered learned they’d be waiting weeks and months for their Watch to arrive.

The real reason for the online approach is pretty simple. iPhones are one size fits all, so it’s easy to march people in, sell them a phone, and march them out. Watches are way different. Many if not most customers have never used a smartwatch. They have to choose from 38 different watch and band combinations. There are two watch sizes — 38mm and 42mm. Better to encourage people to do their product research at home instead of clogging up the stores.

The role of the Apple Store in the release of the Watch is to provide a showroom where people can check out all the watch models and try them on. You need an appointment to do that, though, and you even have to go online to request one of those. You might then learn that your local Apple Store doesn’t offer such appointments.

During the 5-minute try-on, an Apple person places the Watch on your wrist and runs you through some of the features. In many stores, Apple provides kiosks where customers can delve deeper into the features of the Watch. If they want to order one, a store rep takes them over to a laptop where they place the order online.

Apple says everybody who buys a Watch will get a one-on-one session with an Apple rep, either in person or online, in which they learn how to pair their Watch with their iPhone (iPhone 5, iPhone 5c, iPhone 5s, iPhone 6, or iPhone 6 Plus running iOS 8.2 or later) and set everything up (watch faces, notification frequency, etc.).

Apple said in a press release April 9 that the launch of the Watch would be quite different from past products.

“To provide the best experience and selection to as many customers as we can, we will be taking orders for Apple Watch exclusively online during the initial launch period,” said Angela Ahrendts, Apple’s retail chief.

She also said that there would be scarcity: “We expect that strong customer demand will exceed our supply at launch.”