[Correction April 29: Please note that the top user, number of users, and ratings in the chart below are reversed for the two services.]

I started using Meerkat right as buzz started to build up in early March. For those still unfamiliar, Meerkat is the app that lets you live stream video to everyone who follows you on Twitter. Within a few weeks, it had nearly 100,000 downloads and raised $14 million. Then, I went to SXSW and the buzz was not only the sound of a bee, but also the color of one.

As a non-celebrity — not even in the tech world — my largest stream maxed out at 50 viewers during the PSFK Retail Innovation salon, where I kept a two-hour Meerkat going while I spoke alongside executives from major retail companies like Home Depot.

At the end of SXSW Interactive, I felt like there was an over-hype of the platform. It had great branding, true, but it seemed to be mainly the tech crowd participating.

Back in San Francisco, Twitter had already bought Periscope, another live streaming app that is nearly identical to Meerkat but has much better reach to Twitter’s user base, and relaunched the service. I instantly found the rush of hundreds of viewers was much more attainable on Periscope than on Meerkat; plus, on Periscope, you capture people from all over the world.

Periscope easily drives more adoption than Meerkat if you know how to market your streams, and it seems to have won out on most of the reviews of the two apps in the tech press.

But who’s really winning? Here’s a look at some pretty telling stats. 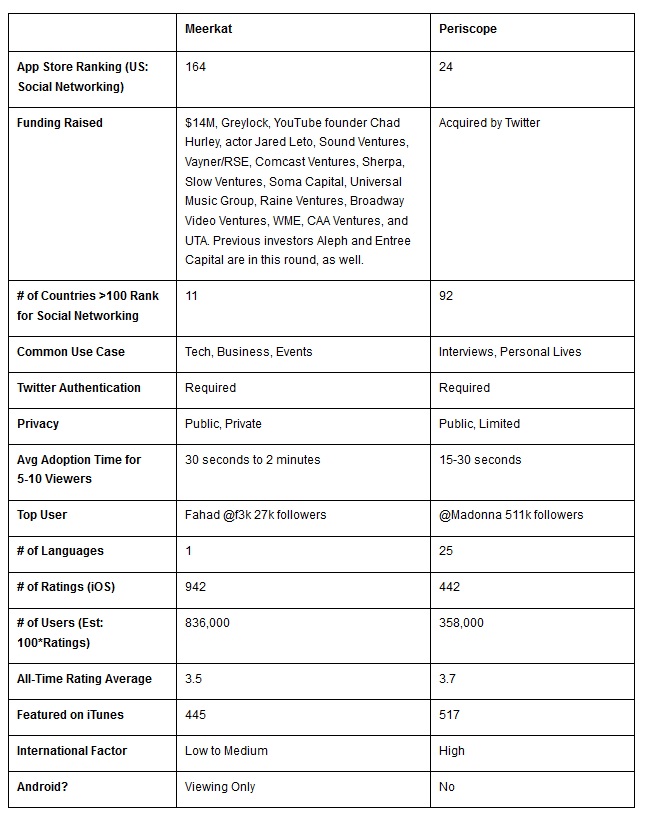 Above: Based on data from AppAnnie, iTunes, Topsy, personal observations, and the apps themselves. Accurate as of 4/23/15.

You could also look at site traffic as a gauge for user awareness, and potentially click throughs from streams posted as tweets.

If you look at this as a win-lose situation, I believe Periscope is winning. Twitter gives the app access to a vast amount of users, and even though Meerkat had early brand success and had early celebrity adoption, more celebrities, streamers, and viewers are moving over to Periscope at a rapid click.

Here are number of streams tracked on Twitter for Meerkat. Periscope launched on March 26. 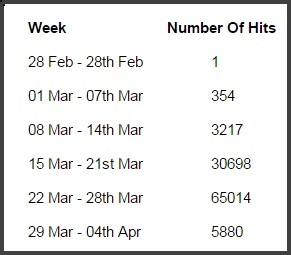 At the end of the day, it will come down to how many people log on to watch your streams.

My last Periscope stream had 233 viewers. My last Meerkat? Zero.

Tristan Pollock is an entrepreneur in residence at 500 Startups and a cofounder of Storefront and SocialEarth. He previously worked at Best Buy and AngelPad.