About.me, the online identity platform that lets you create a public snapshot of who you are, has introduced its first ever app for Android after almost six years in business.

Intro for Android is a spin-off from the main About.me service, an app that lets users post a mini profile of themselves and link out to their social networks, and is designed specifically to let you create and swap digital “business cards.”

This could be a link to your whole About.me profile, or it could just be your mobile number or email address. It’s meant for those moments when you’re about to part company with someone you’ve just met and, rather than digging through your bag for those ever-elusive cards, you can share contact info from your phone instead. 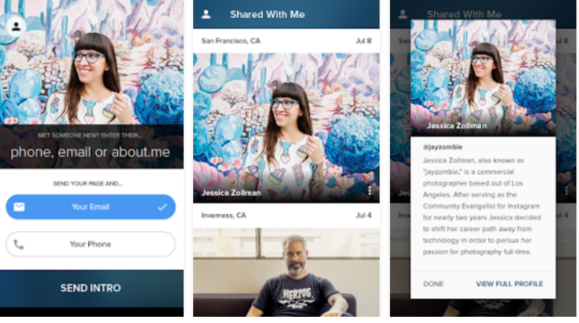 About.me was founded out of San Francisco in October 2009 by Tony Conrad, Tim Young, and Ryan Freitas, though it didn’t launch to the public until December the following year. The company was snapped up by AOL just four days later, before splitting again in early 2013.

Fresh from an $11 million funding round last year, About.me launched Intro for iPhone in October, which was in addition to its existing About.me app for iOS.

About.me has hitherto failed to launch any kind of presence on Android, and it has been a notable absence for the company. The fact that the main About.me service still isn’t available for Android, despite its much more recent product now showing up, is interesting, and on the surface might suggest that the company feels it may have missed the boat. However, a spokesperson has confirmed to VentureBeat that there are plans to launch About.me for Android in the future, but that pushing Intro onto “all key platforms” is the main focus for now.