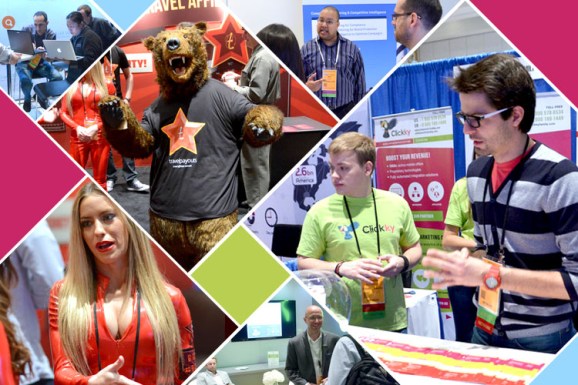 A photo montage of the Clickky team at a conference in Las Vegas.

The investment will support Clickky’s expansion into the United States, South-East Asia and other emerging markets, as well as the launch of new analytics and media buying features and products. Clickky also plans to launch its own mobile advertising sales agency, MobiLimes.

Clickky runs campaigns for clients on multiple traffic sources to reach the whole mobile ecosystem, using in-house targeting and optimisation capabilities. Its platform has its own affiliate and offerwall advertising network with more than 10,000 traffic partners, DMP and “the latest media-buying technologies.”

“We leverage the whole mobile ecosystem to drive maximum volumes of relevant users to each client, starting from our vast affiliate network and finishing with social media and offline pre-installs in mobile stores,” Clickky founder Vadim Rogovskiy said in an exchange with Ukraine Digital News.

Asked about Clickky’s distinctive advantages, he answered: “We were the first to introduce at the global scale the cost-per-engagement pricing model for non-incentivized mobile traffic. This means bringing not only installs of mobile apps, but also relevant users who will actively use the app, watching video or making a purchase inside for instance.”

From Odessa to the global market

With representative offices in Berlin and Moscow, Clickky is growing rapidly. Among its clients are Alibaba, Blablacar and Yandex as well as marketing platforms Glispa and MobPartner, advertising network InMobi, mobile app and game developers Wooga and Plarium. The startup claims its revenue grew two-fold last year in the fast-growing mobile app market.

Rogovskiy says Clickky has no direct competitors in Ukraine and Russia. In other markets, Fiksu and Appia in the US, Applfit in Europe, and Yeahmobi in Asia are the only direct competitors with similar business model, technologies and strategy, according to him.

“There are also many other companies that sell mobile app installs, but their offer is much broader so we don’t consider them as direct competitors,” Rogovskiy added.

iTech Capital Managing Partner Gleb Davidyuk believes Clickky “will continue to grow and soon become a market leader” in the mobile advertising industry – whose revenues will exceed $100 billion as soon as next year, according to him.

Launched in 2011, iTech Capital invests up to $10 million in businesses from all over the world in the fields of ad technologies, financial technologies, Big Data, and online travel.