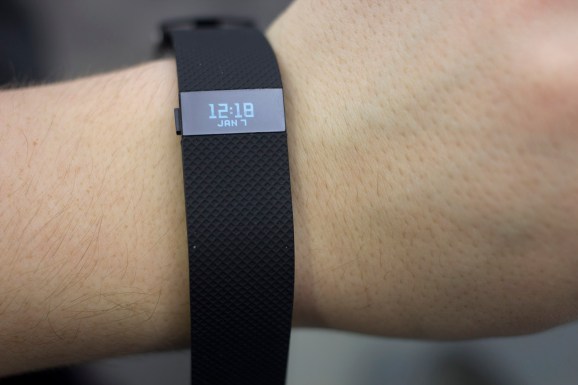 Fitbit has long led the pack in sales of fitness wearables, and now the company has filed papers to hold an initial public offering. The San Francisco-based company hopes to raise up to $100 million, according to the filing.

The timing of an IPO may seem strange to some, as perhaps Fitbit’s greatest existential threat — the Apple Watch — has just hit the marketplace.

But there are more Fitbit users in the world than Apple Watch users. Fitbit had 9.5 million paid active users as of March 31, 2015. Fitbit says it sold 10.9 million devices during 2014 and pulled in $745.4 million in revenues.

The company, which had 579 employees at the end of March, plans to trade its stock on the New York Stock Exchange under the ticker “FIT.” Three banks are helping Fitbit go public — Morgan Stanley, Deutsche Bank, and BofA Merrill Lynch.

Fitbit lists its chief competitors as Adidas, Garmin, Jawbone, Misfit, and Under Armour. Apple and other smartwatch makers are curiously omitted from that list, but they do get a separate mention under “Risk Factors.”

“Many large, broad-based consumer electronics companies either compete in our market or adjacent markets or have announced plans to do so, including Apple, Google, LG, Microsoft, and Samsung,” the filing reads. “For example, Apple has recently introduced the Apple Watch smartwatch, with broad-based functionalities, including some health and fitness tracking capabilities.”

Fitbit’s product line includes the Fitbit Surge, FitbitCharge HR, Fitbit Charge, Fitbit Flex, Fitbit Zip and Fitbit One activity trackers, and the Aria Wi-Fi Smart Scale. The products are carried in more than 30,000 North American retail stores, Fitbit says, and in another 15,000 stores in 53 other countries.

Fitbit chose not to comment on this story. “Due to guidelines related to our public filing, we’re in a quiet period and not able to engage,” a representative said in an email to VentureBeat.

Jordan Novet and Ruth Reader contributed to this story.