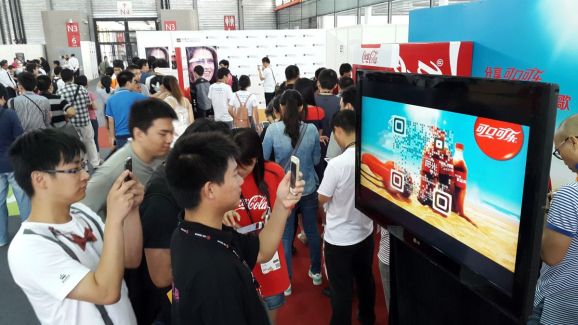 Chinese Internet giant Alibaba is continuing its embrace of quick-response (QR) codes today with the news that it’s partnering with Israeli startup Visualead to launch a new QR code-style format that promises “superior connectivity experiences for offline to online transactions.”

The so-called “dotless visual codes” resemble traditional QR codes in that they have little square markers that tell consumers that an item is scannable with their phone or tablet. However, they’re not technically QR codes. “They are a new standard that solves the limitations of QR codes,” a Visualead spokesperson told VentureBeat.

So rather than bland, black-and-white matrix barcodes, the new codes are capable of embedding colorful images or logos covering 90 percent of the code’s surface.

The dotless codes are part of Visualead’s new Secure O2O offering, which require a more secure application to scan the codes, and Alibaba has already integrated Visualead’s new scanner SDK for today’s launch.

Alibaba is also rolling out its new Blue Stars platform today, which helps manufacturers print labels with unique codes for each individual piece of packaging. For example, when a consumer scans the Blue Stars codes from within Alibaba’s Taobao app, they’ll instantly see more details on the product, including product authenticity. It’s designed to help combat counterfeiting.

Founded in 2012, Visualead sells itself as an offline to online (O2O) platform that helps brick-and-mortar companies connect with customers online. Visualead tweaked the design of QR codes so that they blend in with the design of the packaging. With the latest designs, things are a lot cleaner and less “dotty.” Perhaps more importantly, any remaining dots are removed from the so-called “strategic” areas, such as a human face or logo and, ultimately, they’re designed to be easier on the eye and thus more consumer friendly.

Alibaba is often called the “Chinese Amazon,” as it offers a myriad of e-commerce services, e-payment tools, and other cloud-based offerings. And Alibaba is no stranger to QR codes, having previously partnered with newspapers in China to link printed ads with its online Taobao Marketplace. Additionally, its online payment platform Alipay has used QR codes for mobile payments in-store for some time.

So today’s news comes as little surprise, especially given that Alibaba invested a “multi-million dollar” amount in Visualead back in January, representing Alibaba’s first ever investment in an Israeli startup. At the time of the announcement, Visualead revealed it would be working closely with Mashang Tao, Alibaba’s scannable code technology service, to work on new developments for Alibaba’s online shopping platforms.

Visualead already claims some big-name clients, including Coca-Cola and BMW. With Alibaba on board, it’s in good shape considering Alibaba’s reach in China and beyond. The e-commerce titan floated on the New York Stock Exchange last year in what was to become the biggest initial public offering (IPO) in history.