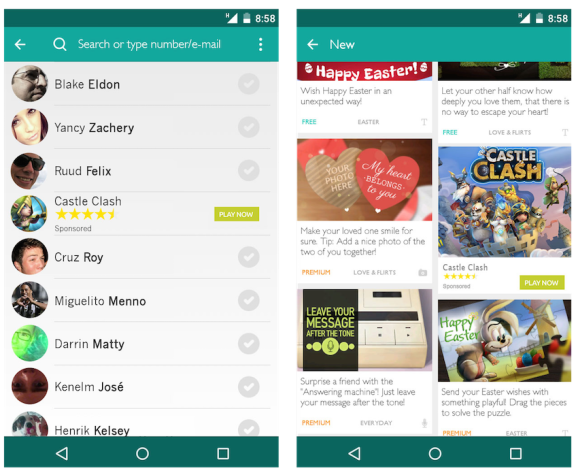 The Avocarrot Exchange delivers, and can prepare, these kind of in-app "sponsored" native ads

Native ads — which blend into the surrounding style of a website or app — are hot.

That heat has boiled up $2 million in seed funding for startup Avocarrot. The San Francisco-based company announced the investment today as a key step in its march to become the largest mobile ad exchange specifically for native ads.

He added that the company is focused on providing app developers with “out-of-the-box solutions to simplify the complex native ad implementation.”

Native ads are complex because they resemble the unique look of an app or site, making automatic handling more difficult.

A typical in-app native ad, Christou said, might be seen by a user scrolling through a news feed in a social media app, reading updates from friends, and then viewing an “update” from an advertiser that looks similar except it is marked “sponsored” or “promoted.”

Besides delivering those kinds of in-app native ads, the Exchange also offers tools to help with the automatic conversion of banner ads into native ads. The idea is to give the app publisher access to a wider range of advertisers for in-app native ads through an automated conversion.

These aren’t editorial-heavy native ads, where an ad might contain a short Sony-sponsored primer on digital cameras. Rather, these are recommendation widgets, short ads in social feeds, or custom native ads, all designed to look like the app.

Avocarrot’s Morpheus, a banner-to-native-ad converter, automatically breaks the common banner into basic building blocks like title, icon, call-to-action, and visual, plus accompanying metadata describing the ad. The company’s software tools then automatically reassemble the parts into a styled template that resembles the targeted app’s user interface.

The Exchange supports the OpenRTB 2.3 standard recently released by the Interactive Advertising Bureau (IAB), which established for the first time protocols to describe native ads as constituent elements that are then served into a publisher’s styled template.

Bit by bit, the digital ad ecosystem is adopting the standard, enabling the delivery of native ads via automated means.

That ecosystem already holds a number of competitors for Avocarrot. In comparison to MoPub, Facebook, and InMobi, Christou noted that Avocarrot “can’t currently compete at scale with these companies.” But he added that his company’s orientation is toward providing expert tools specifically for app developers, instead of those platforms’ wider scopes.

NativeX is focused on game apps, he said, while Avocarrot is designed for app developers of all kinds. As for Sharethrough, AdsNative, and TripleLift, he pointed out they emphasize editorial-heavy native ads and are mostly directed at the mobile web.

The new funding will be used to expand the business development team in San Francisco and the R&D team in Greece, and to market the Exchange.