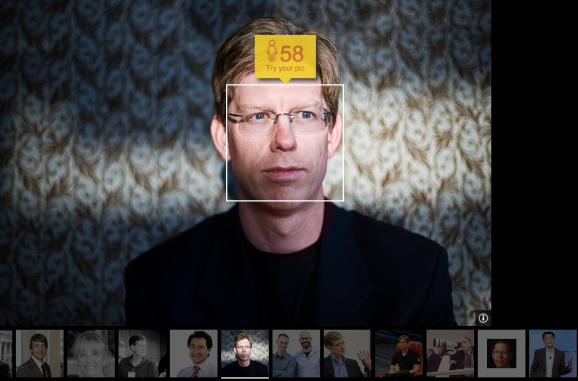 VentureBeat editor in chief Dylan Tweney, estimated to be 58 in this picture by Microsoft's How Old Do I Look? bot.

Microsoft is now approximating the gender and age of people who appear in images in search results in its Bing search engine. This is a new implementation of the face-recognition technology that Microsoft first showed off last month at its Build conference.

To see how it works, just search for a person’s name in Bing — take our editor in chief, Dylan Tweney, as an example. Hit the images tab, click on one of the pictures, and then hit the little gray button floating in the middle of the picture that says, “#HowOldRobot.” Then you’ll see a little box around the face with an age and gender estimate.

“Sorry if we didn’t get it quite right, we’re still improving this feature,” Bing says in a pop-up that appears when you roll your mouse into the box around the face.

Microsoft in fact does seem to be improving the service, which depends on Microsoft’s Face API. Last week, soon after Microsoft had rolled out a version of the How-Old app for Windows Phone, I uploaded to the web app the same photo of myself that I uploaded when Microsoft debuted How Old Do You Look? at Build. It said I looked 37 — better than the 40 estimate I received when the app debuted a few weeks earlier.

It’s unclear how wide this deployment of How-Old is across Bing. Microsoft did not immediately respond to VentureBeat’s request for comment.