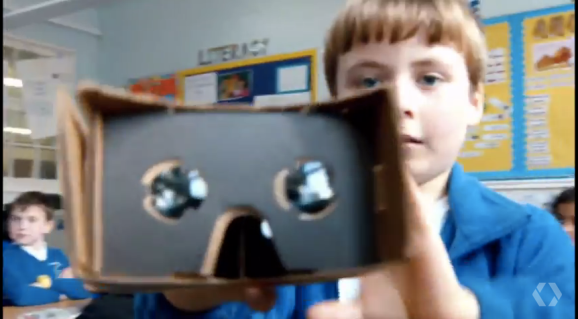 Cardboard is a simple Google gadget made out of a few pieces cardboard and a couple of lenses. You slide a smartphone in, and just like that, you have a virtual reality headset. With Cardboard Expeditions, things get much more interesting.

Multiple Cardboards can see the same content as the teacher, as Google demonstrated in the video below. Teachers can sign up for the new program online. The Planetary Society, the Chateau de Versailles, and the American Museum of Natural History are on board with the new program for a rollout this fall.

And there’s more news for Cardboard: The devices themselves now support 6-inch phones, Clay Bavor of Google Cardboard told the crowd. And the Cardboard SDK for Unity now works with both Android and iOS devices.

“And it’s still just a piece of cardboard,” Bavor said.

There are more than 1 million Cardboard viewers out at this point, Bavor said.

Google will be giving out Cardboard to I/O attendees after today’s keynote.

The company first unveiled Google Cardboard after the keynote at last year’s Google I/O, as a no-big-deal giveaway. Made simply of cardboard and reliant on an Android phone, it seemed like a toy, not a veritable piece of technology.

But Google has since accumulated a community of developers building for Cardboard, with hundreds of Cardboard apps available now in the Google Play Store, while Microsoft and Facebook are both still preparing for rollouts of their headsets.