With 40 million downloads and five million monthly active users (MAUs), Readdle has built a solid fanbase since its inception in 2007. The Ukraine-based startup has seven productivity apps on iOS, covering the likes of PDF editing, scanning, and calendars, and its latest addition fits in nicely with its product line.

Launching today for iPhone, with Apple Watch support too, Spark for iOS is an email client 18 months in the making. Denys Zhadanov, Readdle’s marketing director, said the company strived to cover all bases in its quest to build the ultimate email app. “We’ve tried to improve every core aspect of existing email apps,” he told VentureBeat.

For easy access to your cloud-based files, Spark integrates with the likes of Box, Google Drive, Dropbox, Instapaper, Pocket, and Evernote. It also promises not to be “too smart” like Google’s Inbox by trying to hide email that may actually be important, while natural language support means you can search for emails using questions such as “invoice email from work last week.” 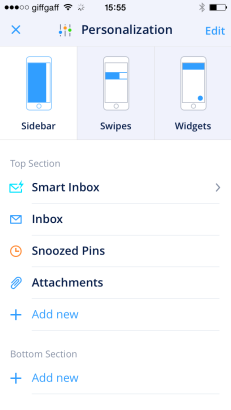 Spark offers a significant amount of customization, letting you tailor what appears in the sidebar, define how swipes work, and add widgets such a calendar, attachments, and smart folders.

If there’s one thing the App Store doesn’t lack, it’s email apps — from Mailbox and Gmail to Inbox (by Gmail) and countless others, it is hard to get overly enthused about yet another email client.

Spark does borrow features from existing apps, including “quick replies” that let you respond to emails with simple sentiments such as “thanks” or “like,” but that’s kind of the point — Readdle has looked at the competition to see what works and what doesn’t, and built what it thinks an email client should look like in the mobile age.

While we’ve not given the app a rigorous test, it’s certainly designed with the same style and panache as Readdle’s other apps — it is slick. And there’s more to come.

Thus far, Readdle has only ever produced iPhone and iPad apps. Though Spark is iPhone-only for now, we’re told that it will eventually be its first true cross-platform offering, with Mac and Web apps due out this year, as well as an iPad incarnation. Interestingly, Zhadanov says that the company may even build a version for Android, which would truly open the company up to a whole new market.

Headquartered in Odessa, the third largest city in Ukraine, and with an office in San Francisco too, Readdle has 70 employees today and never raised a single dime in outside funding, which is good going for a company with so many users. “We’ve built a sustainable business around the App Store,” said Zhadanov.

Spark for iPhone is available to download now for free, and you can watch the official promo video below.