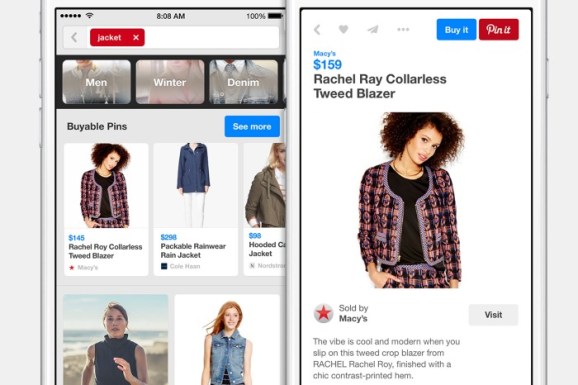 The new "Buy it" button.

Pinterest today announced in essence its own killer app: Buyable Pins. The feature is a way to buy stuff you find in the app.

“In just a few weeks, Pinners in the U.S. will be able to buy their favorite Pinterest finds, right from the app,” Tim Kendall, head of product management at Pinterest, wrote in a blog post on the news.

Clicking the blue “Buy it” button in the app should help Pinterest bring in more revenue as it keeps growing internationally. It’s no small announcement for the San Francisco company, which launched in 2010 and announced $367 million in new funding in March at an $11 billion valuation.

Once Buyable Pins are live, when you search for pins, you’ll see prices for some of them — and you can buy the items in those pins within the Pinterest app. Once you find something you like in a pin, you can swipe in the app to choose just the right color for an item you want to buy. And there will be a new price filter, too, engineering manager Chao Wang wrote in a blog post.

Buyable Pins will first appear in the U.S. on the iPhone and the iPad within the next few weeks. Android and desktop support will come later, Wang wrote. You’ll be able to pay with Apple Pay or a credit card.

Businesses that use Shopify can turn on the new “Buy it” feature with a few clicks, Kendall wrote. Companies can add the feature to Demandware-based stores, too.